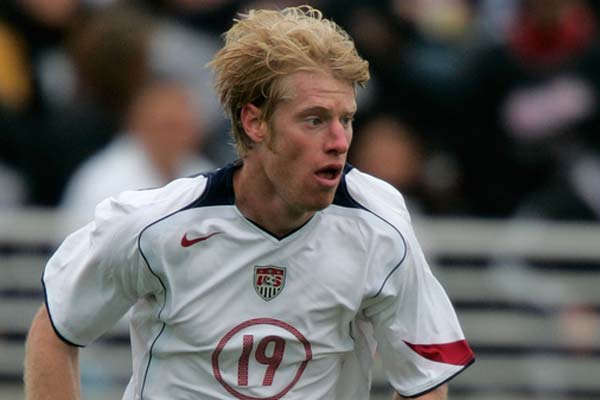 Passed over in the 2003 SuperDraft, the tall and sturdy Nat Borchers was picked up by the Colorado Rapids as a developmental player in March of that year. The victim of poor scouting at the college combine turned out to be a surprise find for the Rapids, and he was soon a fixture at the heart of the team’s defense, dominating in the air and making 24 regular and post-season starts in his first season.

After two more seasons as a first-choice player with the team, he moved to Europe to try his luck with Odd Grenland of Norway, but returned to MLS in early 2008 when he signed for Real Salt Lake. He also picked up two caps for the USMNT, featuring in two friendlies in March 2005. Nat returned the USMNT in 2010, coming on in the second-half against South Africa in Cape Town.

At club level, Nat moved from RSL to the Portland Timbers, winning MLS Cup in 2015. He retired from MLS in February, 2017.

2010: Got his third cap against South Africa on Nov 17th.
2005: Made senior team debut March 9 as a substitute, coming on against Colombia with four minutes to go of a 3-0 win in Fullerton. Ten days later he got his first start in a 1-0 win over Honduras in Albuquerque.
2004: Was a member of the U-23 side that went down 4-0 to Mexico in the semifinal of the CONCACAF Olympic qualifying tournament.

2017: Announced his retirement in Feb.
2016: Played in 21 games for the Timbers.
2015: Joined the Portland Timbers, playing in 31 games en route to the MLS Cup.
2014: Played in 32 games for RSL in his final season with the club.
2013: Part of the RSL squad that finished runners up in the MLS Cup. Played in 28 games, all starts.
2012: Played in 26 games for RSL scoring three goals.
2011: Played 30 regular season games as RSL lost in the Western Conference finals.
2010: Considered one of the best defenders in the League, scoring twice for Real Salt Lake who exited in the playoffs.
2009: The team MVP, playing in all 30 regular season games and lifting the MLS Cup with Real Salt Lake
2008: Returned to MLS, signing with Real Salt Lake and starting 29 of 30 games.
2006-07: Played for Odd Grenland in Norway, relegated to the Norwegian second division at the end of the 2007 season.
2005: Made 31 starts for the Rapids, registering one assist.
2004: Continued as starter for Colorado, making 31 starts in both regular season and playoff play.  Scored two goals and tallied a sole assist.
2003: Played 25 games (24 starts) overall for the Rapids in his rookie season. Scored one goal, in the playoffs.