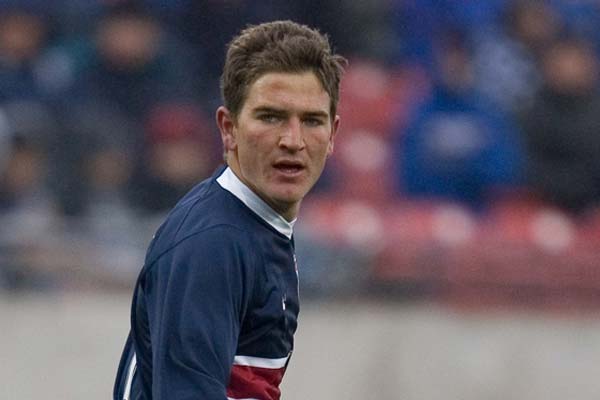 Astonishingly, Bobby Boswell was not included in the 2005 Superdraft, but was spotted by DC’s technical staff at the combine. He quickly developed his raw talent as an assured central defender and became a first team regular.

His potential was realized in his second year as he won the MLS Defender of the Year title and made the All-Star team. He also picked up his first US cap, and developed a reputation as the personality of the DC locker room, making videos for his own website and appearing in Cosmopolitan magazine as one of the country’s 100 most eligible bachelors.

Things changed for Bobby in 2008 when he was traded to the Houston Dynamo. After spending six seasons in Houston, Bobby returned to D.C. for the 2014 season. He moved to MLS expansion team Atlanta United in 2017, announcing his retirement following that season.

2007: Earned his second cap on January 20 against Denmark. Part of the Copa America roster, starting the July 5 game against Colombia.
2006: Earned his first cap against Guatemala on February 19.

2017: Traded to Atlanta United in August, making one appearance for the expansion team.
2016: Another 4th-place finish with DC, making the knockout round.
2015: 4th-place with DC, advancing to the conference semifinals.
2014: Moved to DC through the reentry draft. Finished in 1st-place in the East, exiting the playoffs in the quarterfinals.
2013: Played in 32 games starting all of them in his final season with Houston.
2012: Another trip to the final with Houston, playing in 33 regular season games.
2011: Part of the Houston team that made the MLS Cup final.
2010: Another year as a regular with Houston, who struggled as a team and failed to make the playoffs.
2009: Played in all but one regular season game for Houston.
2008: Joined Houston in the off season, where he won team Defender of the Year honors and played in all but one game.
2007: Lost his place in the DC starting lineup for the first time, to Devon McTavish, as DC won the Supporters’ Shield for the second successive year. Played 24 games (23 starts) overall.
2006: An all-star selection, MLS Best XI, and MLS Defender of the Year in his second season with DC, which won the Supporters’ Shield.
2005: Joined DC United as a discovery player and quickly moved into the starting eleven. Notched three goals and one assist, plus a goal against Chelsea FC in an exhibition game at FedEx Field.

After much thought & speaking w/ my family, it pains me to announce my retirement from International Soccer today w/ the US Men’s National Team. I’m taking my name out of the hat so the younger guys can have their chance to shine!!