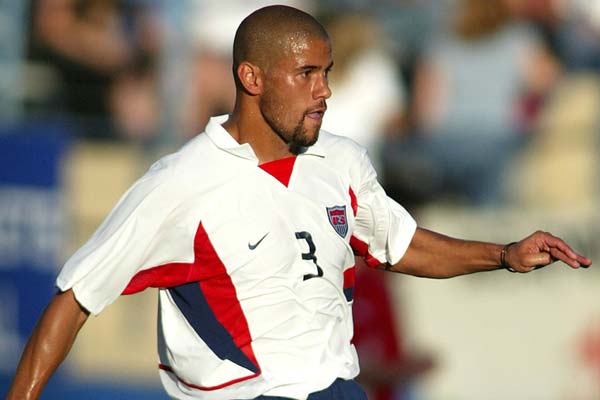 A player who earned his status as one of the top defenders in Major League Soccer, C.J. Brown literally played for nothing with the only fully amateur team in the USL’s old D-3 Pro League, the San Francisco Bay Seals. Brown finally broke through into the professional ranks with the expansion Chicago Fire in 1998, proving his skill as a traditional defender and getting a surprise start in Bruce Arena’s first USMNT squad in November of 1998.

2003: Returned to the USMNT to play the whole game in the 2-0 win over Wales.
2000: Played in the Gold Cup and the U.S. Cup, seeing action in a total of four matches.
1999: Won bronze medal in the Confederations Cup with the U.S. team and appeared in eight full internationals in 1999.
1998: Made his international debut along with coach Bruce Arena against Australia on November 6, 1998.

2010: Brown announced his retirement late in the season. With the Fire not reaching the playoffs, fellow retiree Brian McBride returned the captain’s armband to Brown with minutes remaining in the regular season finale in Carson.
2009: Once again a regular in the back line in Chicago, serving as captain. Helped the Fire to an Eastern Conference final in the playoffs.
2008: Only available for three games in an injury-plagued season.
2007: Made 32 regular and post-season starts for the Fire as they reached the Eastern Conference final.
2006: Made 30 regular season playoff games and starts (one goal, two assists) as the Fire reached the playoffs, but were knocked out in the East semi-finals.
2005: Played 23 games (21 starts) in injury-affected season as the Fire made it to, but lost, the Eastern Conference final.
2004: Made 24 starts for the Fire, tallied one assist. Assumed captain duties for an injured Chris Armas.
2003: Assisted on one goal in 21 games of action, including starts.
2002: Set a career high with three assists in 24 starts.
2001: Started in all 22 games he appeared in the regular season.
2001: Named to MLS All-Star team and assisted on a goal in the game.
2000: Started 27 regular season games and won his second U.S. Open Cup with the Chicago Fire. He also helped the Fire reach the MLS Cup final.
1999: Continued as the Fire’s defensive stalwart, starting 26 games.
1998: Drafted by the expansion Chicago Fire and nailed down a starting job. He won the MLS Cup and the U.S. Open Cup with the club and was named MVP of the U.S. Open Cup final.
1995-97: Played three seasons with the D-3 San Francisco Bay Seals, finishing as team MVP and drawing attention as part of the Bay Seals squad that reached the semifinals of the U.S. Open Cup.