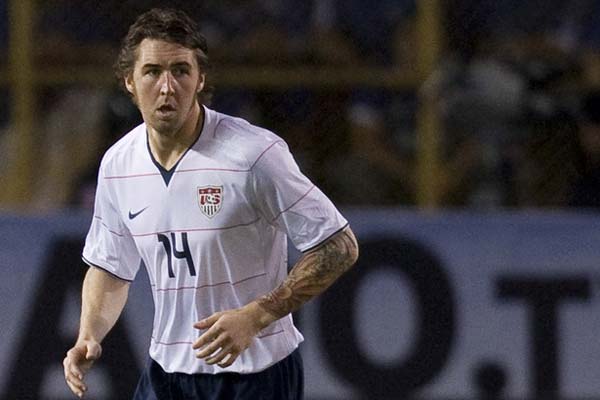 After an impressive stretch at University of Maryland, Danny Califf became a member of his hometown club when then Galaxy head coach Sigi Schmid picked him in the first round of the MLS SuperDraft. By 2002, he was an MLS Cup winner with LA and a member of the USMNT squad. After a spell in Denmark, Califf returned to MLS with Philadelphia in 2010. In May, 2012 he was traded to Chivas USA.  Califf moved to Toronto through the Re-Entry Draft for the 2013 season and announced his retirement from MLS on July 12, 2013.

2009: Started the March 28th Qualifier against El Salvador.
2008: Called in to January training camp.  Started the June 8th friendly against Argentina.
2007: Recalled to the USMNT for the Copa America, where he came on as a substitute against Paraguay and captained the US against Colombia.  Made sub appearance in 1-0 October exhibition win in Switzerland, playing second 45 minutes. Likewise in the 1-0 victory in South Africa the following month.
2004: Played in 16 minutes 3/16 in 1-1 tie with Haiti, scored first international goal.
2003: Played and started in nine games. Member of team for Confederations Cup and Gold Cup. Played 90 minutes vs. Turkey and France in Confederations Cup. Appeared in three of five Gold Cup matches.
2002: Earned first national team cap against South Korea on Jan. 19  in Gold Cup.
2000: Was a member of the 2000 U.S. Olympic team that took  fourth place overall in Sydney, Australia.
1999: Was a member of the USA  side that competed at the Pan American Games.
1999: Scored the winner in a  match against England at the 1999 World Youth Championship.
1999: Started 16  matches for the U-20 national team.
1998: Grabbed his first under-20 goal in  a 3-1 victory over Switzerland at the 1998 Paolo Valenti Tournament in  Italy.
1997: Led the backline of the U.S. under-17 side that competed in the U-17 World Championship in Egypt and was named FIFA “Player of the Match” in a narrow loss to powerhouse Brazil.

2013: Retired on July 12 after 14 seasons in MLS, becoming a scout for Toronto.
2012: Traded to Chivas USA on May 17th playing in 19 games. Drafted by Toronto on Dec 14th.
2011: Led the Union to the playoffs for the first time in club history.
2010: Returned to MLS with the expansion Philadelphia Union. Played in 28 games with Philadelphia missing the playoffs.
2008-09: Spent the season with FC Midtjylland making 26 apparances and scoring a goal.
2007-08: Regular starter for Aalborg as it challenges FC Copenhagen for the Danish title.  Moved to FC Midtjylland.
2006-07: Helps team to third place in the Danish Superliga 2006-07 season.
2006: Signs with Danish side Aalborg BK and becomes a regular starter.
2005: Traded to San Jose.  Named MLS Best XI.
2004: Played in a career-low 13 games due  to injuries. Recorded two assists.
2002: Started 23 of 25 games scoring one goal and two assists as he helped lead the Los Angeles Galaxy to their first MLS Cup and the Lamar Hunt U.S. Open Cup final
2001: Nabbed the winning goal in the Lamar  Hunt U.S. Open Cup final against the New England Revolution.
2000: Named a  finalist for MLS Rookie of the Year honors.
2000: Was picked by the Los Angeles Galaxy in the first round of the MLS Superdraft and went on to be voted Galaxy Defender of the Year by the local media.

College: A two-year starter at the University of Maryland, Califf earned NSCAA Third Team All-America at the end of his sophomore season in 1999.