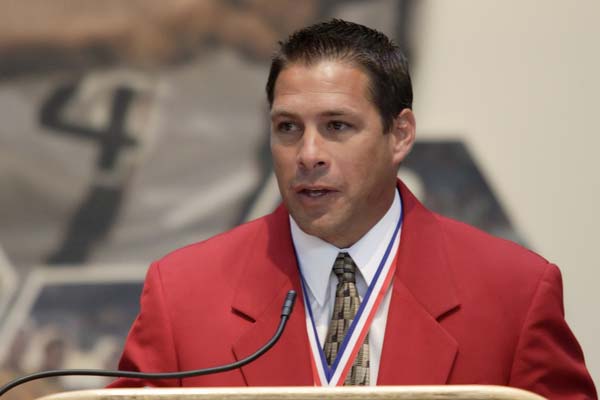 Paul Caligiuri is truly a pioneer in the contemporary age of American soccer. He was the first American-born player to land a major playing contract overseas in the professional European leagues and also was a major force on the 1990 and 1994 World Cup teams. However, Caligiuri is probably best-known for the “goal heard around the world,” the shot he took against Trinidad and Tobago that sent the USMNT to the 1990 World Cup for the first time in 40 years.  A solid professional in MLS, he is now teaching the next generation of American soccer players. In October, 2018 he became the head of development for the UPSL.

2001: Assisted on four goals in 28 games as he helped the Galaxy to the U.S. Open Cup and the MLS Cup Final.  Retired at the end of the season.
2000: Appeared in 28 games, making 24 starts, and amassed 2,212 minutes, the second most in his five-year MLS career.
2000:  Caligiuri had one of his best seasons contributing to the second ranked defense in MLS that allowed only 37 goals and 1.16 GAA. He scored three goals and added four assists for 10 points, including a game-winning assist vs. Kansas City on 8/5.
1999: A veteran member of the Galaxy’s defensive unit, Caligiuri played one of his most consistent seasons, contributing to the Galaxy’s league low 29 goals allowed and 0.91 GAA, best in the MLS. He finished the season appearing in 27 games, all starts, and amassed 2,275 minutes the most in his four year MLS career.
1998: Appeared in 34 regular season games for the Galaxy, registering a total of eight points on two goals and four assists.
1997: Tallied a goal and two assists in sixteen starts for the Galaxy … scored his first Galaxy goal in his first appearance with the team, heading in the Cobi Jones cross in a 2-1 loss at Colorado.
1996: Played for the Columbus Crew, appearing in 22 games and registering three goals and two assists for seven points … registered 90 minutes in 20 of his 22 appearance.
1995-96: played for St. Pauli of the German Bundesliga (First Division) appearing in 14 games, recording one assist.
1991: Helped Hansa Rostock win promotion to the German Bundesliga.