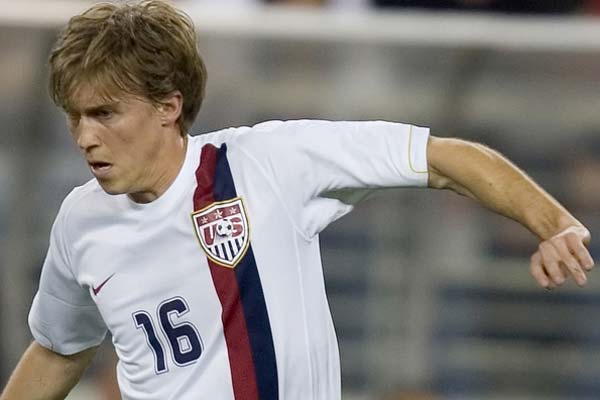 Brian Carroll spent the first five years of his MLS career with DC United, where he was used mainly as a defensive midfielder.  He was part of the MLS Cup winning squad in his breakout season with the team in 2004. Carroll turned into a first choice player, playing in every regular season game in 2004 and 2005, and racked up most team minutes in 2006.

He has excelled as a holding midfielder who can distribute the ball superbly to either flank.  He is also under-rated in an offensive role, but admits he gets yelled at by team-mates when he moves out of position.  Yet the results can occasionally be astonishing.  Against New England in September 2007 he marauded from the half way mark to the end line and crossed left-footed for Luciano Emilio to head in a game-clinching goal.

Carroll was picked up by San Jose in the November 2007 expansion draft. The following week he was traded to the Columbus Crew.  He was an MLS Cup winner with the Crew in 2008. In 2011 he joined the Philadelphia Union. Carroll had over 300 MLS appearances, announcing his retirement following the 2017 season.

2010: Started against South Africa on Nov 17th.
2009: Played in the 3-2 win over Sweden on January 24th.
2007: Two appearances, both as substitutes against Mexico and Ecuador.
2006: Two appearances against Japan and Guatemala.
2005: Made his USMNT debut against Panama in October and got his first start against Scotland.

2017: Announced his retirement at the end of the Philadelphia Union’s season.
2016: Limited to five games with the Union.
2015: Made 22 appearances with Philadelphia.
2014: Played in 21 games with the Union.
2013: 23 games and a career high two goals with Philadelphia.
2012: Played in 33 games with the Union.
2011: Joined Philadelphia playing in 30 games and making the conference semifinals.
2010: Scored one goal for the Crew in 2010, with the club exiting in the first round of the playoffs.
2009: Played in 26 games, all starts with the Crew falling to Real Salt Lake in the playoffs.
2008: A key member of the Crew’s MLS Cup winning squad.  Started every regular season game.
2007: Traded to Columbus via San Jose at season’s end.
2006: The model of consistency! 34 games, 34 starts, and again one goal and three assists as DC took the Supporters’ Shield trophy.
2005: Again played 34 games (32 starts), scoring first goal as a pro, and notching three assists.
2004: Under new coach Peter Nowak, won MLS Cup with DC.
2003: The 11th pick overall in the draft, Carroll played in the US Open Cup and friendlies for DC.