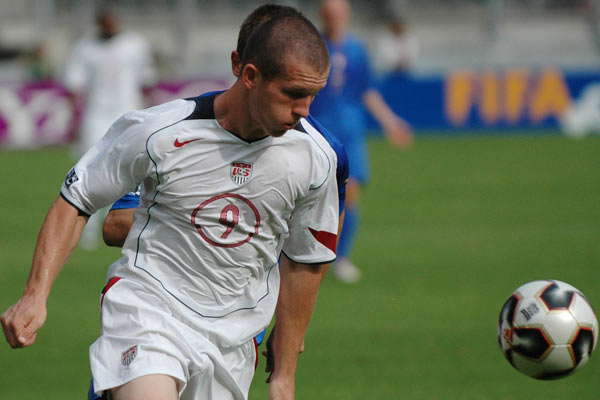 Chad Barret debuted for the USMNT in 2008, three years after joining MLS. The Chicago Fire drafted Barrett with the third overall pick in the 2005 SuperDraft. Barrett moved to Toronto midway through the 2008 season, playing for the USMNT against Barbados in a World Cup Qualifier on June 22nd. He joined the LA Galaxy in 2011, winning the MLS Cup. New England selected Barrett in the re-entry draft for the 2013 season. Barrett spent 2014 and 2015 with Seattle, signing with San Jose as a free agent in 2016. Barrett moved to Real Salt Lake for 2017, his final season in MLS. Officially retired in September, 2018.

2017: Joined Real Salt Lake in January, playing in three games.
2016: Missed the playoffs with San Jose, playing in 20 games and scoring two goals.
2015: Made the playoffs with the Sounders, signing for San Jose as a free agent following the season.
2014: Won the Supporters’ Shield with Seattle, making the Western Conference finals. Won the US Open Cup.
2013: Played in 19 games starting 8 and scoring twice for the Revolution.
2012: Played in 18 games with LA. Joined New England through the re-entry draft.
2011: Traded to LA where he played in 27 games and won MLS Cup.
2010: 23 games and 8 goals with Toronto.
2009: 29 games and 5 goals with Toronto.
2008: Traded to Toronto midway through the season in the deal that allowed Brian McBride to join Chicago. Had 5 goals in 16 appearances with Chicago, playing in 13 games and scoring 4 goals for Toronto FC.
2007: Played in 30 games, starting 25 and scoring 7 goals with the Fire.
2006: Played in 16 games scoring 5 goals in MLS play and won the U.S. Open Cup with Chicago.
2005: Drafted 3rd overall by the Chicago Fire in the SuperDraft. Played in 20 games his rookie season, scoring a goal.

High School and College: Played two seasons for UCLA before signing with MLS.