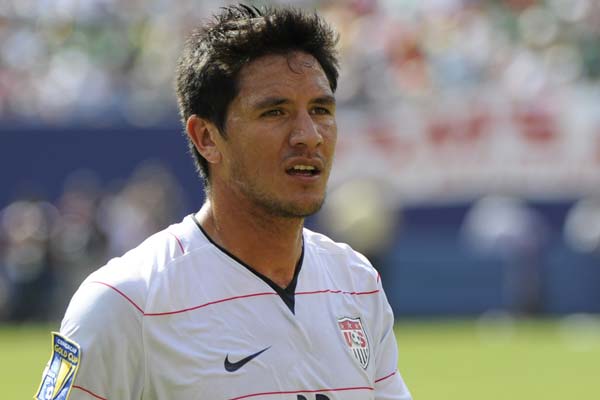 You can add Brian Ching to the growing list of players that have risen to USMNT caliber by playing in Major League Soccer.  The first Hawaiian to ever play for the USMNT, Ching earned his caps from coach Bruce Arena by rising from relative anonymity to a spot in the San Jose Earthquakes’ starting lineup in only two years. It culminated in the spring of 2006 when the Houston Dynamo striker was rewarded for his strong start to the MLS season by being named to Arena’s 23-man roster for the 2006 World Cup.

While he did not see action in Germany, Ching’s high work-rate and powerful shot continued to impress. He was a member of the US team that beat Mexico 2-1 to win the 2007 Gold Cup.

On the club side, Ching was crucial to the Houston Dynamo the MLS Cup title in 2006 over the New England Revolution.  Moments earlier, Ching had scored the game-tying goal late in overtime to force the shootout. The following year he missed the final through a calf injury as Houston repeated its success.

Ching retired as a member of the Dynamo following the 2013 season, spending the season as a player/assistant coach. He is now the managing director of the Houston Dash.

“I have a couple of great memories with the US. The first would have to be my first goal against Jamaica on the road to tie the game. That was being able to achieve a childhood goal of scoring for the US. The next memory is being at the World Cup game against Italy standing on the field and singing the national anthem with the team and all the US fans. That moment gave me chills up and down my spine because I was so proud to be wearing the US jersey.” from 10 Questions With Brian Ching

2010: Scored against El Salvador on Feb 24th after coming on as a second-half substitute. Played in the Sendoff Series against the Czech Republic.
2009: Played against Sweden in the annual January friendly and started against Mexico on Feb 11th to open the final round of World Cup Qualifying. Started against El Salvador on March 28th. Part of the Gold Cup squad.
2007: A member of the Gold Cup winning side, and played the full 90 against Mexico in the final. Made four appearances (two starts), including one goal and one assist.
2006: Set a personal high by playing in nine matches for the US National Team … Was a member of Bruce Arena’s 23-man side at the 2006 World Cup, but did not appear in any matches … Scored two goals in the run-up to the World Cup.
2005: Six caps for the senior side in 2005, including three World Cup Qualifiers.
2004: Played four games, scoring two goals in back-to-back World Cup Qualifiers.  Notched first goal on August 18, 2004 to tie the game 1-1 against Jamaica in WCQ.
2003: Earned his first cap on May 26 against Wales at his home field, Spartan Stadium, and followed that up with another appearance for the U.S. on July 11 against Poland.

2011: Strong season with Houston where the Dynamo made the MLS Cup final.
2010: Scored seven goals for Houston.
2008: Scored 13 times in 25 games with five assists for Houston.
2007: Helped Houston repeat the success of 2006 in an injury affected season, but missed the MLS Cup final after a calf injury suffered during the Western Conference final win over Kansas City. Overall, made 23 appearances (20 starts), scoring nine goals and registering three assists.
2006: Led the Houston Dynamo to the MLS Cup title by scoring the tying goal against the New England Revolution in the 114th minute, less than one minute after the Revs had taken a 1-0 lead, and scored the winning penalty kick in the resulting shootout. Scored 11 goals and registered two assists in 21 games for the Dynamo, which included a four-goal outburst in the team’s opening game against Colorado.
2005: Had seven goals and five assists in only 16 regular season matches for the San Jose Earthquakes, still good for third best on the team.
2004: Played in all 25 games (21 starts) for the Earthquakes.  Lead the team in scoring and goals with 28 points on 12 goals and four assists. Tied for first in the League for goals with Eddie Johnson. Named to MLS Best XI team and MLS comeback player of the year.
2003: Played 15 games for the Quakes, scoring eight goals and tallying one assist, before rupturing his Achilles tendon in August.
2002: Spent the entire season with the A-League’s Seattle Sounders, where he finished second in the league with 16 goals.
2001: Drafted by the Los Angeles Galaxy with the fourth pick of the second round, 16th overall. Played eight regular season games and two playoff games, scoring one goal.

College: Scored 34 goals over his career at Gonzaga and set an assist record for the school with 23. Attended the Kamehameha Schools in his native Hawaii.