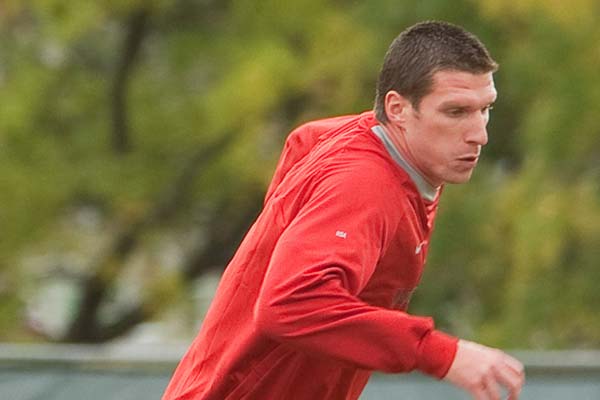 A second-generation professional player, Kenny Cooper started his career with Manchester United in 2003 before moving to MLS with FC Dallas.  A large traditional striker, Cooper scored on his debut for the full USMNT.  Cooper made his return to European soccer in July of 2009 when he was transferred from FC Dallas to 1860 Munich in the 2.Bundesliga. In January, Cooper moved to Plymouth Argyle on loan for the rest of the 2009-10 season.  He returned to 1860 Munich for the 2010-11 season, signing with the Portland Timbers in January, 2011.  Kenny was traded to New York early in the 2012 season.  He returned to Dallas for the 2013 season. Joined Seattle in 2014, moving to Montreal the following season.

2015: Member of the Montreal Impact playing in one game.
2014: Moved to the Sounders making 22 appearances and scoring three goals.
2013: Traded to Dallas and played in 31 games scoring six times. Joined Seattle for the 2014 season through the re-entry draft.
2012: Traded to New York where he scored 18 goals in 33 games.
2010-11: Returned to 1860 Munich but missed the start of the season due to injury. Joined Portland for their MLS expansion season.
2009-10: Left MLS for 1860 Munich in the 2.Bundesliga.  After recovering from injury, joined Plymouth Argyle on loan.
2008: An MVP candidate with Dallas, Cooper scored 18 goals in 30 games with three assists.
2007: After starting the season strong with four goals in 8 games.  A broken leg caused him to miss the bulk of the season, returning for the US Open Cup final on Oct 3rd and finished the season.
2006: Signed with Major League Soccer and FC Dallas, scoring 11 times in 31 games.  Scored a hat trick against Charleston in the US Open Cup.
2005: Loaned to Oldham Athletic where he scored three times in ten appearances.  Scored five times in 12 games for Manchester United reserves.
2004: Loaned to Portugal’s Academica Coimbra.
2003: Signed with Manchester United.

Youth and College: Cooper joined Manchester United from high school, where he was the 2003 Dallas Morning News High School Player of the Year for Jesuit College Preparatory School and a McDonald’s High School All-American.  He also played for Dallas Solar ’85.  Was set to play collegiately for Southern Methodist before opting for Manchester United.