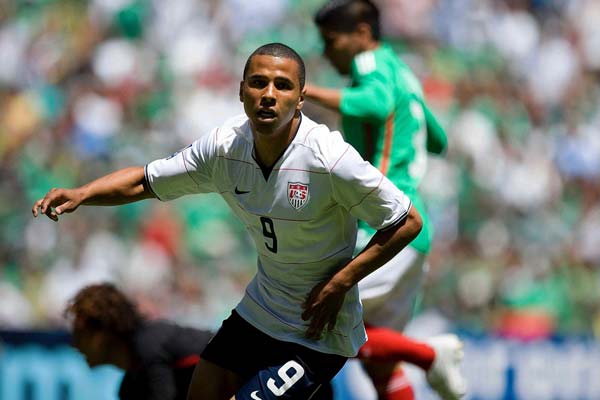 Charlie Davies made a quick rise from Boston College to the full National Team by way of Swedish side Hammarby. In 2008, Davies emerged as an offensive force in Sweden, scoring 14 goals in 27 games. Following the 2009 Confederations Cup, Davies completed a transfer to Sochaux of France’s Ligue 1. He was seriously injured in a car accident in October, 2009. After a lengthy recovery, he joined DC United on loan for the 2011 MLS season. He returned to Europe with Randers before moving on loan to New England in 2013. That move became permanent in time for the 2014 season. Davies moved to the Philadelphia Union in August of 2016. He announced his retirement from pro soccer on March 2, 2018. Davies currently works for CBS Sports as a commentator.

2009: Appeared in the January 24th friendly against Sweden and was a second-half substitute against Costa Rica in World Cup Qualifying. Strong showing in the Confederations Cup.  With the US for the group stage of the Gold Cup. Scored in the 9th minute against Mexico, giving the United States their first lead at Azteca Stadium.
2008: Scored his first National Team goal against Trinidad & Tobago on October 15th.
2007: Called in for the friendly against China on June 2 and named to the Copa America roster. Came on as a substitute during the July 5 game against Colombia.

2018: Retired on Mar 2.
2017: Missed the playoffs with Philadelphia, leaving the club at the end of the season.
2016: Missed the first half of the season due to successful treatment for cancer. Rejoined the Revs in late July. Traded to Philadelphia on Aug 4.
2015: Played in 33 games, scoring 10 goals in a playoff season for the 5th-place Revs.
2014: New England made the loan permanent in January with Davies playing in 18 games. New England finished 2nd in the East and made the MLS Cup final.
2013: Joined New England on loan in August, playing in four games.
2012: Joined Randers in Denmark.
2010-11: Still working on his comeback from injury, Davies appeared with Sochaux’s reserve team in the Fall of 2010.  He joined DC United on loan for the 2011 season.  Scored 11 goals in 26 appearances for United, who didn’t pick up his option.
2009-10: Completed a transfer to French club Sochaux. On October 13th, 2009, he suffered serious injuries in a car accident.  Davies missed the rest of the 2009-10 season and the World Cup while recovering.
2008-09: Started 25 of 27 games and scored 14 goals for Hammarby.
2007: Scored his first goal in the first leg of Hammarby’s InterToto Cup series with Klaksvik.  Scored hat-trick in final game of the season after going goalless in all his previous league appearances for the team.
2006: Signed with Sweden’s Hammarby.