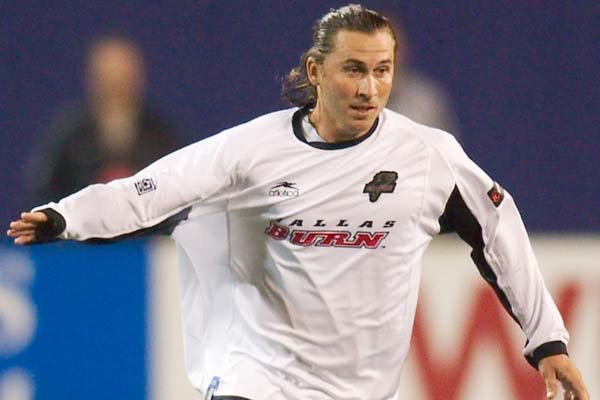 Chad Deering earned his American soccer pedigree playing in Germany in the early 1990s. The Texas native was a key member of the Dallas Burn of Major League Soccer. Deering was a versatile two-way player who tracks back defensively and pushes forward into the offense with equal comfort. Known for having one of the hardest shots in all of MLS, he was one of the top choices to take free kicks for both club and country. Deering is now a director of youth soccer for a club in the Dallas area.

2000: Started two matches and came off the bench in three others for the United States.
2000: Delivered a solid 90-minute performance as a defensive midfielder in the USA’s important scoreless draw with Costa Rica in World Cup qualifying.
1999: Credited with the assist for his perfectly placed long ball to Eric Wynalda on November 17 against  Morocco.
1998: Was selected for the U.S. World Cup 98 team and started one game, the 2-0 loss to Germany.
1998: Scored his first goal ever for the USMNT in a 2-2 draw with Paraguay on March 14, 1998 in San Diego.
1993: Made his USMNT debut October 13, 1993 against Mexico.

2004: Signed contract with MISL Dallas Sidekicks.
2003: Scored a goal and five assists in 27 games for the  Burn.
2002: Notched one goal and four assists for six points as the Burn  once again reached the playoffs.
2001: Scored two goals and four assists in leading the Dallas Burn to the playoffs.
2000: Finished the season fifth on the team in scoring, with 13 points, and third in assists, with nine.
1999: Finished the year second on the team in scoring with a career-high four goals and seven assists despite playing in only 25 games.
1998: Played in only 14 games for the Burn but finished tied for fourth on the team in scoring with three goals and one assist.
1998: Allocated to the Dallas Burn on July 2, 1998 and went on to score his first MLS goal on August 14, 1998, a game-winner at Colorado.
1997: Played 15 games in the German Bundesliga for VfL Wolfsburg alongside international teammate Claudio Reyna.