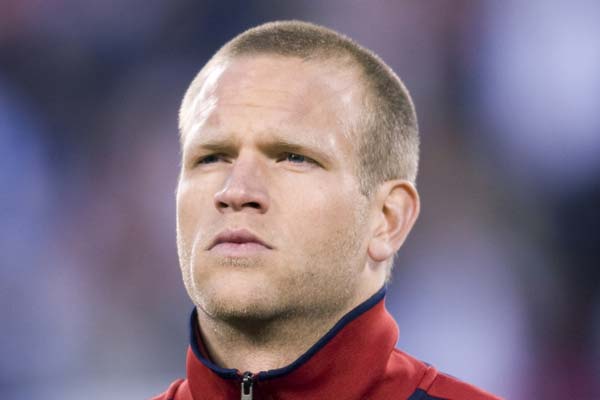 Jay DeMerit’s story reads like those of many American players who tried to launch a professional career between the end of the North American Soccer League and the beginning of Major League Soccer. DeMerit took his game to England. After several tryouts and time spent playing park and pub soccer, DeMerit got his shot and ended up playing in the Premier League. Just one difference, DeMerit’s story starts in 2003.

A successful college player, DeMerit couldn’t catch on with any MLS club, spending a year with the Chicago Fire reserves. Holding a European passport, he decided to move to England and try there. As decisions go…. A 2004 training game against Watford got him a contract and the next season he was crucial to the squad that won promotion to the Premier League. By 2007, he was on the USMNT and made the 2010 World Cup squad.

DeMerit left Watford at the end of the 2010 season, signing with 2011 MLS expansion club Vancouver.

In the Fall of 2011, a movie about DeMerit’s move to England and eventual rise to prominence as a Premier League player was released. Titled Rise & Shine: The Jay DeMerit Story, the movie was partially funded by fans through a Kickstarter campaign.

Jay DeMerit announced his retirement on July 24, 2014. He finished his Vancouver Whitecaps tenure with 70 appearances and one goal.

2011: Started against Argentina on March 26th and Paraguay on the 29th.
2010: Named to the World Cup roster. Started all four games in South Africa.
2009: Returned to the National Team as a substitute in the 2-1 win over Honduras on June 6th. Part of the revamped US defense in the Confederations Cup, taking the starting role at center back. Started against Mexico on Aug 12th.
2007: Earned his first cap on March 28 against Guatemala, and appeared twice (one start) as the US won the Gold Cup.  Made two starts at the Copa America, in defeats to Argentina and Paraguay.

2014: Announced his retirement as a member of the Vancouver Whitecaps on July 24th.
2013: Injured on opening day and missed the rest of the season.
2012: Another 20 game season with Vancouver.
2011: Acquired by the Vancouver Whitecaps. Played in 20 games.
2009-10: A freak eye injury that ended up requiring cornea replacement surgery kept DeMerit out of the lineup to start the 09-10 season. With his contract expiring, DeMerit left the club at the end of the 2010 season. He signed with the Vancouver Whitecaps on November 18th.
2008-09: In and out of the lineup for Watford due to injury, Jay regained his starting place near the end of the season.
2007-08: Began new Championship campaign as an established starter in Watford’s central defense, helping them to the top of the table, but suffered an injury that kept him out for November.
2006-07: Spent the season with Watford in the Premier League.
2005-06: Promoted with Watford to the Premier League. Scored with diving header in 3-0 playoff final win over Leeds United.
2004-05: Signed with Watford and earned a contract extension.
2001-02: Played with the Chicago Fire PDL club.