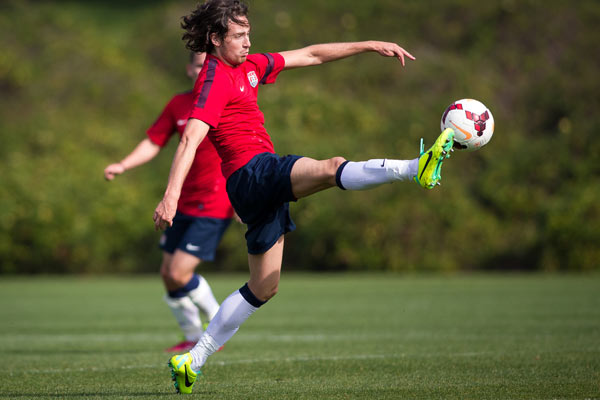 Mikkel ‘Mix’ Diskerud got himself on the USMNT radar after emerging as a youth player in Norway. Born in Oslo, Mix represented Norway at the Under-18 and U-19 level before opting for the United States youth National Team program. Mix’s mom is American, offering him dual nationality and a pick of National Team programs. As a club player, he joined Staebak’s first team in 2008 after three years with the club as a youth player. Mix moved to Rosenborg in 2012. In 2015, he moved to MLS as a member of the expansion NYCFC. Diskerud transferred to Manchester City in 2018 and went on loan to IFK Goteborg. He then moved to Ulsan Hyundai in the Korean league. Diskerud spent 2020 on loan to Helsingborg before completing a move to Denizlispor in January, 2021. He joined Omonia in Cyprus for the 2021-22 season.

2021-22: Moved to Omonia in Cyprus, finishing 7th.
2020-21: Signed with Denizlispor in January, with the club finishing last in the Super Lig.
2020: Moved to Helsingborg, finishing 15th and relegated.
2019: Played regularly with Ulsan Hyundai, finishing 2nd.
2018: Signed with Manchester City and went on loan to IFK Goteborg playing in 12 games. Went on loan to Korean club Ulsan Hyundai in July, playing in 17 games and finishing 3rd.
2017: Went on loan to IFK Goteborg, playing in 29 games and scoring five goals in Sweden’s Allsvenskan.
2016: Played in 12 games for NYCFC.
2015: Signed with MLS and joined NYCFC for their expansion season. NYCFC finished out of the playoff places in the East.
2014: Finished 2nd in Norway with Rosenborg, leaving the club at the end of the season.
2013: A member of Rosenborg, signing an extension with the club in February for the 2013 season.
2012: Spent part of the season on-loan with Gent, leaving Staebak for Rosenborg on Aug 9. Mix had 81 appearances with ten goals over four seasons with Staebak and six games with Gent while on loan in 2012. Staebak were relegated at the end of the season.
2011: Finished 10th with Staebak.
2010: Finished 12th with Stabaek
2009: Finished third, qualifying for the Europa League.
2008: Debuted with Staebak’s first team in Norway’s topflight. Won the league and qualified for the Champions League.