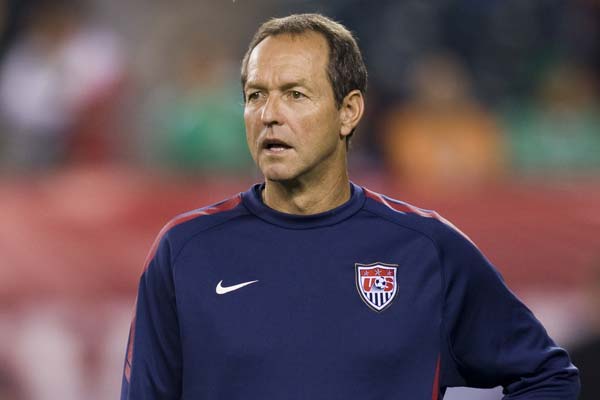 Considered one of the key players for the USMNT in the 1990’s, Thomas Dooley brought the professionalism he earned through years in the German professional leagues.  The son of a US serviceman, Dooley was eligible to represent the United States and he took that option in 1992.  Appearing in the 1994 and ’98 World Cups, Dooley captained the USMNT in France.  After 14 years in the German leagues, including a German Cup win with Kaiserslautern in 1990 and a UEFA Cup win with Schalke in ’97, Dooley signed with Major League Soccer and joined Columbus in the summer of ’97.  He retired in 2000 and was elected to the National Soccer Hall of Fame in 2010.

“I always loved America even though I have never visit the country. What I knew had come from TV and some books. Suddenly, I got invited to play for the US and the World Cup. Actually, that was a very, very easy decision for me, but I asked my step-dad about the decision first. His opinion was very important to me.” from 10 Questions With Thomas Dooley

2000: Started 17 of 20 games with MetroStars in final professional season.
2000: Acquired in a trade by the New York/New Jersey MetroStars from Columbus for Mike Duhaney.
1999: Started 19 of 25 games for Crew assisting on one goal; named MLS All-Star.
1998: Started all 23 games for Columbus scoring a goal and two assists leading the Crew to the Eastern Conference finals.
1998: Named to MLS Best 11 and a 1998 All-Star and won MLS Fair Play Award.
1997: Named to MLS Best 11 and finished second in voting for MLS Defender of the Year.
1997: Scored his first MLS goal in his MLS debut on June 21 vs. MetroStars on a header.
1997: Transferred to Columbus Crew where he scored four goals and an assist.
1996-97: After missing half the season with knee injury, he returned and played for Schalke in seven league games, starting three and scoring two goals.
1995-96: Won UEFA Cup with Schalke 04 defeating Inter Milan on penalty kicks.
1995-96: Returned to line-up from foot injury and helped lead Schalke to 19-1 record scoring two goals in seven league games. Transferred to Schalke 04, the team he idolized as a child, in the Summer.
1994-95: Transferred to Bayer Leverkusen.
1990-91: Scored four goals in 23 games helping Kaiserslautern win German Bundesliga.
1989-90: Won German Cup with Kaiserslautern.
1986-87: Played 24 games leading Homburg to a promotion to the Bundesliga.
1984-85: Helped Homburg win Third Division title and promotion to Second Division.
1984-85: Began professional career in German Third Division with Homburg scoring five goals in 38 games.

Youth and college: Joined Homburg from FK Pimaseus where he was a goal-scoring center forward in a top amateur league. Studied architecture for three semesters at the University of Kaiserslautern.