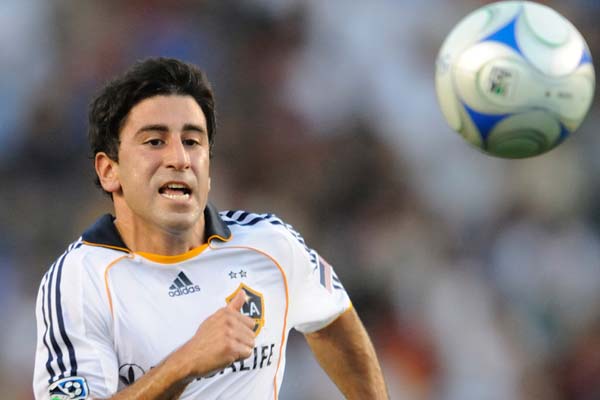 Another player to emerge from the hotbed of American soccer in Northern New Jersey, Alecko Eskandarian’s USMNT and MLS career ended early due to concussions. Had a stellar 2004 season at DC, when he scored 14 goals and won MVP at the 2004 MLS Cup championship game, but missed most of 2005 after suffering a concussion.

In 2007, DC United traded him to Toronto FC, where he scored just once before being moved to Real Salt Lake in exchange for Jeff Cunningham. Retired in 2009 as a member of the LA Galaxy after suffering from post concussion syndrome, Alecko is now a coach with the New York Cosmos.

2004: Was one of five DC players named to the USMNT U-23 National Team for the CONCACAF Olympic Qualifying Tournament held in Guadalajara, Mexico. He made four appearances in the tournament, including three starts, and tallied four goals, including a hat trick against Honduras in the final match of group play.
2003: Earned only senior cap in May win over Wales.
2002: Led USMNT Under-23 team in scoring with 7 goals and 2 assists. Named top goalscorer of Madeira International Tournament in Portugal with U-23s.
2001: Played four games for the U.S Under-20 team at the World Youth Championship in Argentina, and scored three goals in 20 games overall.
2000: Played three games for Under-20 team.
1999: Played for US Under-17 National Team.

2009: Played in three games for the Los Angeles Galaxy before retiring after suffering a serious concussion.
2008: In a span between August 30 and October 4, scored for Chivas USA against each of his three previous teams (RSL, DC, Toro
2007: Scored once for new team Toronto FC before being traded to Salt Lake. Scored just one goal in 17 games, from the penalty spot, and registered three assists, as his team struggled to keep off the bottom of the Western Conference.
2006: Scored seven goals and tallied two assists in 22 games for DC United. Was named as an MLS All-Star as a Commissioner’s Pick
2005: Limited to only 10 appearances (one assist) due to post-concussion syndrome after a collision with New England Revolution goalkeeper Matt Reis.
2004: Provided the bulk of DC United’s goal-scoring punch throughout the 2004 season. Earned two Player of the Week nods to accompany his four Sierra Mist Goal of the Week accolades.  Helped lead DC United to League championship title with 14 goals in total.
2003: Scored three goals in 23 games in his first season with DC United. Selected number one overall in the MLS SuperDraft after leaving college at end of junior year.

Youth and college: Named Soccer America’s College Player of the Year in 2002, ending his University of Virginia career having started 56 of the 60 games he appeared in, and recording 4,565 minutes of playing time. Set UVA record for most goals scored in a single season (25), and finished tied for second all-time with 54 single-season points. Following 2002 campaign, Eskandarian was named the Missouri Athletic Club’s Hermman Trophy award winner.  Selected as the 2000 Gatorade National Player of the Year at Bergen Catholic. Named a National Soccer Coaches Association of America (NSCAA)/adidas All-American. Chosen as the NSCAA/adidas New Jersey State Player of the Year after leading the state of New Jersey in scoring with 66 goals and 15 assists through 25 games during his senior year