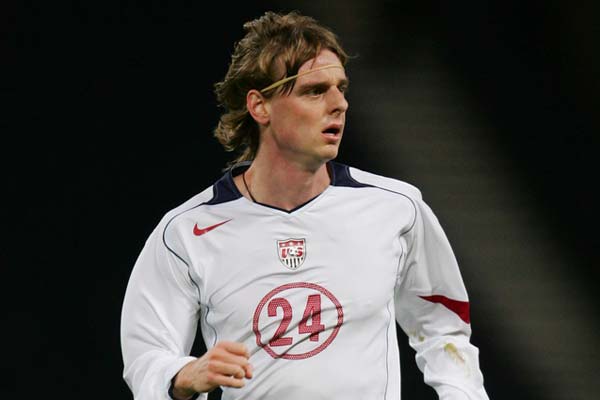 In 2003 Eddie Gaven became the youngest player to sign a contract in MLS history at the age of 16 years, two months after graduating from US Soccer’s Under-17 residency program that same year.

Gaven’s debut against DC United was eventful, to say the least, as his coach Bob Bradley took advantage of some dubious (and since changed) substitution rules to bring him on as an overtime sub for the injured Mark Lisi in July 2003 . First he donned a goalkeeper’s jersey (all outfield subs having been used) to become the youngest goalkeeper in league history, with keeper Tim Howard temporarily in Lisi’s position. Gaven then quickly swapped positions with Howard, and went on to score the game-winning, sudden death goal.

Made steady progress in his late teenage years with New York, but during a time of high turnover was traded to the Columbus Crew for Edson Buddle on March 28, 2006, just before the season opener. The trade reunited Gaven with former Under-20 National Team head coach Sigi Schmid. Gaven retired following the 2013 MLS season.

2010: Started against South Africa on Nov 17th.
2009: Played against El Salvador on Feb 24th.
2008: Appeared in the January 24th friendly against Sweden.
2007: Made two sub appearances at Copa America, in losses to Argentina and Colombia.
2005: Two caps, March 9 against  Colombia and November 12 against Scotland.
2004: Earned his first senior  cap against Poland on July 11.
2003: Played for the U.S. Under-17, Under-20, and Under-23 teams at various points during the year, including the CONCACAF Olympic Qualifying tournament and every minute of the FIFA Under-17 World Championships.
2001: Entered the US Soccer residency program at the IMG Academy in Bradenton, Fla.

2013: Played in ten games with Columbus, retiring at the end of the season. 2012: Started all 34 games for the Crew.
2011: Scored five goals in 26 games for the Crew.
2010: Part of a Columbus squad that finished 2nd in the East and exited in the first round of the playoffs.  Scored three goals with five assists.
2009: Scored three times in 24 games for Columbus with two assists.
2007: Scored five goals and had seven assists in 27 games (21 starts) as the Crew narrowly missed out on the playoffs.
2006: Traded from the New York Red Bulls to the Columbus Crew for Edson Buddle on March 28. Made 30 starts, registering four goals and four assists.
2005: Posted a career high in  goals with eight to go along with four assists in 28 appearances for the  MetroStars.
2004: Named to MLS Best XI, becoming the youngest ever (at age 17) to receive the honor. Named to the MLS All-Star game. Scored seven goals and added seven assists.
2003: Became the youngest player in MLS history as well as its second-youngest goalscorer. Played 12 games, starting seven, and tallied one goal and one assist.