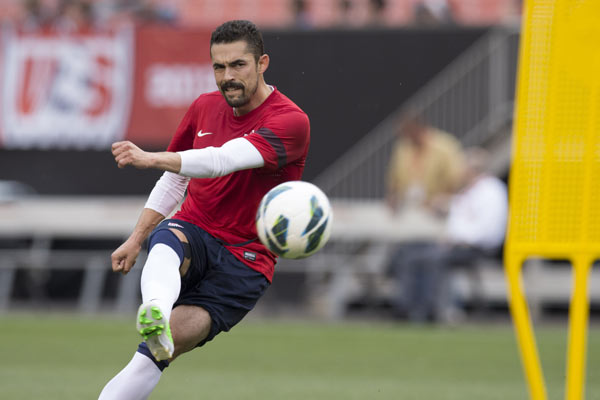 Herculez Gomez was a quality attacking player, equally comfortable in either the striker or the traditional forward roles.  In 2007 he was traded from the LA Galaxy to the Colorado Rapids, and quickly took revenge by scoring the winning goal against his old club when the two teams met in Denver. That year he also won his first caps for the US as part of the roster that went to the Copa America. At the end of the 2009 season, Gomez left Major League Soccer for the Mexican League, where he scored on his debut for Puebla.  He finished the season tied for leading scorer in the Mexican League, earning him a call up for National Team camp and a transfer to Puebla.  He played in three of four games in the 2010 World Cup.

Gomez won the Clausura title with Santos Laguna in 2012.  Santos was a CONCACAF Champions League finalist the same season. In the summer of 2013, Herculez joined Tijuana. The club loaned him to Tigres for the 2014 Apertura season. He signed with Toronto in August 2015. Herculez joined the Seattle Sounders in 2016, winning the MLS Cup. He retired following the season and now hosts a popular soccer show, Futbol Americas, for ESPN.

2016: An MLS Cup winner in his final season as a player.
2015: Played in eight games on loan to Puebla for the 2015 Liga MX Clausura. Joined Toronto FC in August.
2014: Made the semifinals of the CONCACAF Champions League with Tijuana. Loaned to Tigres for the 2014 Apertura season.
2013: Joined Tijuana. 2012: Won the Spring title with Santos Laguna. Lost in the Champions League final to Monterrey.
2011: Spent the ’10 Apertura and ’11 Clausura with Pachuca, scoring five goals in 29 games. Signed with Mexican club Estudiantes Tecos for the 2011 Apertura season, scoring seven times in 16 games in a tough season for Tecos.  Moved to Santos Laguna for the 2012 Clausura season.
2010: Became the first American to win the Mexican scoring title as a member of Puebla.  Signed with Pachuca at the end of the Clausura season.
2009: A regular with Kansas City, Gomez appeared in 26 games starting 20 with three assists.  Signed with Puebla in the off-season.
2008: Traded to Kansas City in September. Played in eight games for the Wizards.
2007: Traded to the Colorado Rapids for goalkeeper Joe Cannon. Tallied four goals and two assists in 20 games (16 starts) as the Rapids failed to make the playoffs.
2006: Scored five goals in 30 games (19 starts) for the Galaxy, and registered three assists.
2005: Scored 12 goals in 26 games overall (20 starts) in his first real season in Major League Soccer, winning the US Open Cup and the MLS Cup.
2003-04: Played with the San Diego Sockers in the Major Indoor Soccer League.
2002: Spent the season with the USL’s San Diego Gauchos before signing with the LA Galaxy as a developmental player.
2001: Played for Cruz Azul’s reserves and Durango in the Mexican League.