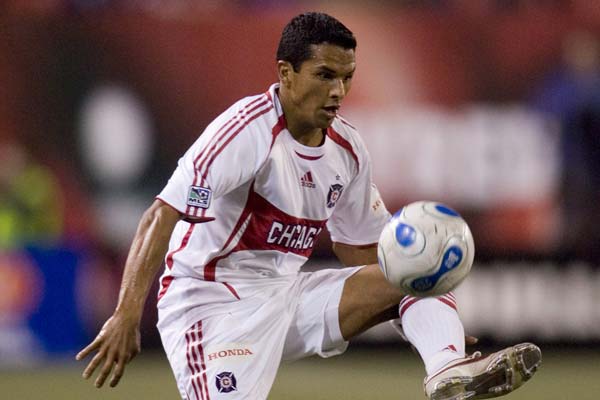 Diego Gutierrez was a Major League Soccer standout since joining MSL in 1996 after his junior year at Rockhurst College. Gutierrez showed that he wasn’t only a formidable talent but a truly versatile one as well. As a result of a rash of injuries within his Chicago Fire team, Gutierrez was forced to move back from midfield to fullback during the 2001 season and proved well up to the task. In 2002 he moved to the Kansas City Wizards, but after four years there he returned to the Fire, taking up where he left off as a starter and a defensive stalwart. He retired following the 2008 MLS season.

Born in Colombia, and a member of the South American nation’s national youth program, Gutierrez became a US citizen during the 2000 MLS season.

He is currently a broadcaster working Champions League games for Fox Sports and handling commentary for Sporting Kansas City. Gutierrez’s accomplishments as a humanitarian are widely praised.

2005: Called into Bruce Arena’s camp in January before the start of the final round of CONCACAF World Cup qualifying for the 2006 World Cup.
2004: Earned a call-up to Arena’s December camp after  having a standout season for the Kansas City Wizards.
2001: Trained with the USMNT after becoming a US citizen in 2000. Earned his first cap on December 9, 2001, in a 1-0 loss to Korea Republic.
1989: Played in the World Youth Championship in Scotland with the Colombian under-20 team.
1988: Was a part of the Colombian youth side that won the South American U-20 Championship.
1987: Played with the Colombian U-17 national side.

2008: Finished his career as a member of the Chicago Fire.
2007: Played 26 games (23 starts) for the Fire, only coming off the bench for the team’s final two playoff games.
2006: Joined the Chicago Fire during the  off-season. Played 27 games (21 starts).
2005: Started 18 of 21 contests for Kansas City, notching two  assists.
2004: Started all 32 regular season and playoff games for the Wizards’ team that went all the way to the MLS Cup final, but lost 3-1 to DC. Also scored three goals, registered four assists, and was team captain for final two months of the season. Helped the Wizards lift the US Open Cup.
2003: Played 23 games overall, starting 20.
2002: Traded to the Kansas City Wizards in February for a first round draft pick in the Superdraft.  Played 25 games overall (24 starts), scoring one goal and registering three assists.
2001: Was selected to play in the MLS All-Star Game. Made 29 starts overall (one goal, five assists) as the Fire reached the MLS Cup Final, but lost 1-0 to his future club Kansas City.
2000: Recorded two goals and 13 assists in 24 matches for  the Fire.
1998: Was acquired by the Chicago Fire from the Kansas City Wizards in the eighth round of the 1997 expansion draft. Scored his first professional goal, a spectacular bicycle kick, against the Chicago Stingers in the US Open Cup.
1996: Selected by the Wizards in the 1996 MLS College Draft after his junior year at Rockhurst College. Appeared in 28 of 32 matches and started in all five of Kansas City’s playoff games.