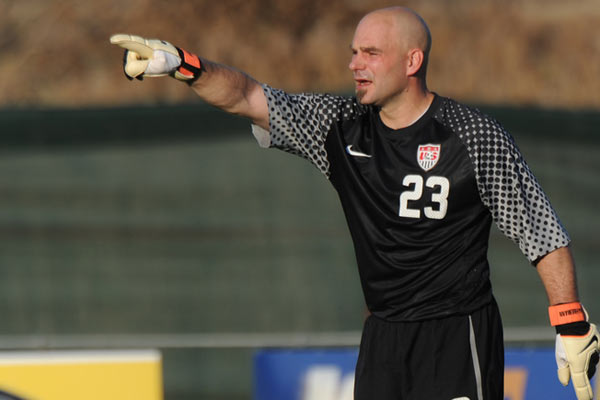 Marcus Hahnemann worked his way up from Division II college soccer all the way to the English Premier League across the course of a long playing career. The tall, imposing keeper quietly became one of the top goalkeepers in MLS after jumping to the American top flight from the A-League. Fulham snatched him up, but his time at Craven Cottage was short and he left for Reading for the 2002-03 season. There he led the Royals to an improbable charge that almost took them to the Premier League.

Hahnemann’s breakthrough came during the 2005-06 season when he led the Royals to the Championship title, which earned the side its first promotion to England’s top flight in its long history.  Hahnemann posted 17 shutouts in 27 matches, and was considered to be one of the top goalkeepers in England. His strong showing prompted Bruce Arena to name him to his 23-man USMNT roster for the 2006 World Cup. Although Hahnemann did not see action in Germany, he pushed starter Kasey Keller on the field and also offered much comic relief to the side, just as he does for his club team.  A character and a thinker.

In 2009, Hahnemann joined the newly promoted Wolverhampton Wanderers, eventually winning the starting job for the Premier League club.  He made the USMNT World Cup squad for 2010, joining Everton for the 2011-12 season. In 2012, he returned to MLS as a member of the Seattle Sounders. He retired following the 2014 MLS season.

2011: Started the Paraguay game on March 29th.
2010: Named to the World Cup squad and played the second-half against Australia in the team’s final warm-up game.
2007: Was an unused substitute for 1-0 August exhibition loss in Sweden. Played first half of October exhibition win in Switzerland.
2006: Made the 23-man World Cup roster for the US National Team. Did not appear in any matches in Germany, as he served as one of Kasey Keller’s backups.
2005: Called into camp for World Cup Qualifier in February, also for camp in May.
2003: Played against New Zealand in Richmond and was named to the Confederations Cup roster.
1994: Played three games going 1-1-1 in November against Honduras, Trinidad & Tobago, and Jamaica

2014: A member of the Seattle Sounders team that won the US Open Cup and Supporters’ Shield. Retired on Dec 8, 2014.
2013: Played in four games for the Sounders.
2011-12: Signed a short-term deal with Everton in September. Joined Seattle in September of 2012.
2010-11: Spent most of the season as the backup keeper with Wolverhampton, leaving the club at the end of the season.
2009-10: Signed with Wolves for their first season in the Premier League.  Won the starting job and helped keep Wolves up.
2008-09: Played a season in the Championship with Reading, who tried to keep several of their Premier League players in the squad.  After the club failed to win promotion, Hahnemann’s contract wasn’t renewed.
2007-08: Began Reading’s second EPL campaign still as first-choice keeper, and stayed between the sticks even when his team shipped 31 goals in its first 14 games.
2006-07: Played in all 38 league games as Reading finished in eighth place.
2005-06: Played every minute of every league match to open the campaign, a total of 27 ma:tches … Posted a remarkable 17 shutouts in those 27 games, headlining Reading’s push to gain promotion to the EPL … Played his 100th game for Reading away at Millwall at the end of August.
2004-05: Played his 100th game for Reading away at Millwall at the end of August.  Started every League and Cup game the entire season.
2003-04: Injured his knee in March 2004, came back towards the end of the season but could not push the Royals to a second consecutive playoff berth.
2002-03: Led Reading to English First Division promotion play-offs before losing to Wolverhampton over two legs. Set a career high with 47 matches played in all competitions.
2001-02: Loaned to Rochdale and Reading from Fulham, making six appearances for both clubs.
1999-00: Purchased by Fulham of the English First Division for $90,000.
1999: Made 15 starts for the Rpaids, posting a GAA barely above one per game.
1998: Named the Colorado Rapids Defender of the Year
1997: Made his first appearance for Colorado as a substitute in April, then started the next 23 consecutive league games. Made 30 appearances overall, and was in the Rapids’ team that lost the MLS Cup Final 2-1 to DC United at RFK Stadium.
1996: Helped Sounders win A-League championship.
1995: Led the A-League goalkeepers in minutes played (2160), shutouts (9), fewest goals allowed (24) and goals against average (1.00)
1994: Had a record-setting year in 1994 with Seattle Sounders, when he was the only rookie to be named to the first team of the A-League All Stars, posting eight shutouts and 66 saves in his first professional season.

Youth and college: As Seattle Pacific’s only three-time All-American, Hahnemann helped the Falcons capture the 1993 NCAA Division II Championship in his senior year. Named Defensive MVP of the 1993 Final Four.  Rated among the nation’s top 10 in shutouts and goals-against average in all four of his collegiate seasons.  Was a starter on the U-23 Washington state team that captured national titles in 1991 and 1992. Three year letterman at Kentridge High School in Kent, Wash., before transferring to Newport High in Bellevue.  Team MVP at Kentridge during junior year.  Posted 11 shutouts during his 1988 season at Newport.