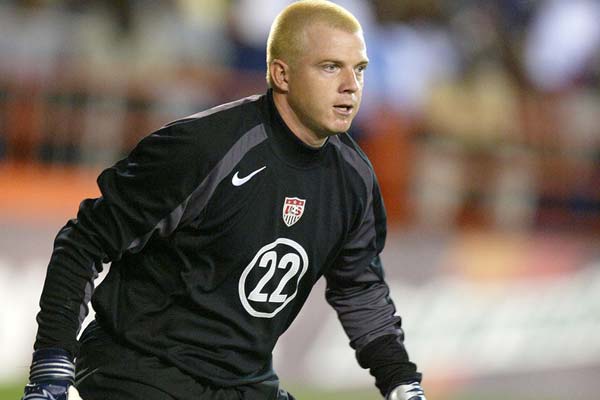 Kevin Hartman ended his career following the 2013 season as one of the top goalkeepers in MLS history. Drafted by the LA Galaxy in the third round in 1997, the former UCLA standout appeared in eight games for the MLS club in his rookie season, recording three clean sheets.

1998 produced more of the same success for Hartman, as he quickly became the number-one choice for Galaxy coach Sigi Schmid.1999 was the defining moment for the young keeper, as he was awarded MLS Goalkeeper of the Year honors and named to MLS Best XI after allowing less than a goal per game in the 1999 season. In 2000, he played his first game for the USMNT.

2006: Made two appearances for the National Team, his last on February 10th against Japan.
2005: Came off the bench for one game, maintaining a clean sheet for Joe Cannon in a 1-0 win against Honduras on March 19.
2004: Called into camp in January, played the second half of game against Haiti on March 13.
2003: Was called in for training camps in Bradenton, Fla., in January.
2001: Was called into the year’s first US National Team training camp in Claremont, Calif.
2000: Made his first appearance for the USMNT on September 8, 2000 in a match against Jamaica that ended in a 2-2 draw.  Hartman allowed one goal in a 45-minute performance.

2013: Retired after playing his final pro season with New York.
2012: Played in his 400th MLS game on July 4th with FC Dallas.
2011: In June, became the first goalkeeper in MLS history to record 100 shutouts.
2010: After parting ways with Kansas City in the off season, Hartman ended up signign with FC Dallas.  Injury curtailed Hartman’s consecutive games streak, but he was integral to a strong Dallas club that returned to the playoffs.
2009: Another year of consecutive appearances in goal for Kansas City.  On March 28th, he became the League’s all-time saves leader.
2008: Once again played in every MLS game and recorded 10 shutouts.
2007: Played in all 33 Wizards’ games (seven shutouts, including two in the playoffs) as they reached the Western Conference final, with a GAA of 1.50. Chosen as one of two keepers for the MLS All-Star roster.
2006: After starting in 28 games as the Galaxy’s starting goalkeeper and registering a 10-12-6 record, he was traded to the Kansas City Wizards on December 15.
2005: Backstopped a LA Galaxy side that won its second MLS Cup title. Started 31 of the Galaxy’s 32 regular season matches, posting a 13-13-5 record with six shutouts. Played all four post-season games, posting a 0.46 GAA.
2004: Appeared in and started all 30 of the Galaxy’s matches. Named the club’s Most Valuable Player for the second consecutive season.
2003: Signed multi-year deal with MLS. Made 32 starts for LA overall.
2002: Made one save in 2002 MLS Cup as the Galaxy won for the first time, beating New England 1-0.  Appeared in 24 games overall, including six post-season games (three shutouts).
2001: Helped the Galaxy to the CONCACAF Champions’ Cup and the Lamar Hunt US Open Cup.  Made 18 MLS starts overall.
2000: Was named to his first MLS All-Star squad after beginning the 2000 campaign with a 10-game undefeated streak. Became the first goalkeeper in MLS history to record back-to-back seasons with a goals-against average of a goal or less per game.
1999: Became the first goalkeeper in MLS history to record back-to-back 20 win seasons.  Was named MLS Goalkeeper of the Year and voted to MLS Best XI.
1998: Led MLS with a record 22 games won, starting 28 of 29 matches for the Galaxy.
1997: Was taken by Los Angeles in the third round of the MLS Superdraft.