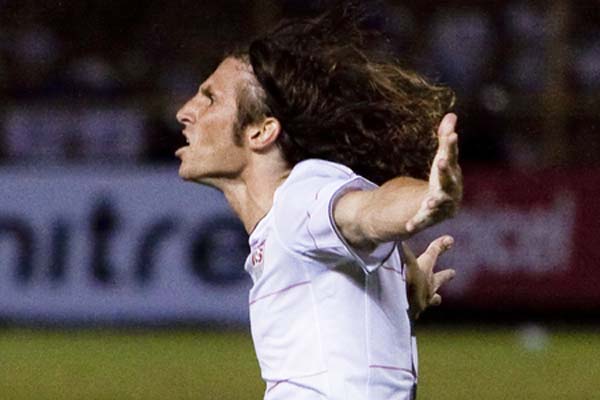 One of the fastest players to ever wear the USMNT shirt, Frankie Hejduk can play as either a midfielder or a defender. He made a name for himself internationally as one of the best US performers in the 1998 World Cup, which earned him a contract with German giants Bayer Leverkusen.

Prior to making the jump to Germany, Hejduk was one of the most colorful players to ever play in MLS and celebrated goals with a unique dance, spinning his arms to honor his idol Bob Marley.

Since returning to MLS in 2003 with the Columbus Crew, Hejduk has been one of the top right backs in the league. After making the All-Star team three straight years, Hejduk was forced to miss all but four games of the 2006 season after tearing the ACL in his right knee on April 29. The news came just one day after the announcement that he had made Bruce Arena’s 23-man USMNT roster for the 2006 World Cup.

Hejduk returned to the National Team under new coach Bob Bradley and was a regular part of the squad for 2010 World Cup Qualifying. Hejduk played his final MLS season as a member of the Galaxy, winning the 2011 MLS Cup. He retired at the end of the season, returning to Columbus in the new role of Brand Ambassador.

2009: Started and played 90 minutes against Mexico on Feb 11th. Scored against El Salvador on March 28th. Started against Denmark on Nov 18th.
2007: Returned to the international fold at the Gold Cup, making three starts, and scoring a goal against Canada in 2-1 semifinal victory. Missed final through suspension after second yellow card against Canada.
2006: Saw action in four games before tearing his ACL. Was named to the original 23-man US roster for the World Cup.
2005: Started five games, while appearing in seven overall.  Made three starts while playing in four games for the US in the CONCACAF Gold Cup, helping Bruce Arena’s squad win the regional title.
2004: Made eight World Cup Qualifying appearances.
2003: Started eight of nine games for the US, helping to lead the team to third place at the CONCACAF Gold Cup.
2002: Started four games at the 2002 World Cup at left back. Was suspended from the round of 16 match with Mexico for a second yellow card.
2002: Reclaimed his spot with the USMNT, starting all five games at the 2002 Gold Cup and assisting on Josh Wolff’s game-winning goal in the final against Costa Rica.
2001: Started and played 61 minutes against Brazil on March 3.
2000: Made six appearances for the USMNT in 2000, and scored the second goal in the Nike US Cup-clinching victory over Mexico. Competed with the US Olympic Team in Sydney as an over-age player, starting all six games at right-back.
1999: Was a member of the bronze medal-winning squad at the 1999 FIFA Confederations Cup in Mexico. Scored two goals on the year, both during the 1999 Nike U.S. Cup.
1998: Started in two World Cup matches at France ’98. Netted the winning goal in a 3-0 win over Austria in a friendly in Vienna.
1996: Scored game-tying goal for US in 2-2 tie with Guatemala in World Cup qualifying on December 21, his first international start. Earned first full National Team cap as a substitute against El Salvador on August 30. Was member of the 1996 US Olympic team that finished ninth at the Centennial Olympic Games, playing every minute for the US.

2011: Won the MLS Cup as a member of the LA Galaxy.
2010: Regular in a Crew squad that exited the playoffs in the first round.  Signed with the LA Galaxy in December.
2009: Won the Supporters’ Shield with the Crew.
2008: Won the 2008 MLS Cup with the Crew.
2007: Reclaimed Crew starting spot, making 24 starts as Columbus struggled to make the post-season.
2006: Only played in four games with the Crew before tearing the ACL in his right knee on April 29.
2005: Appeared in 18 games and scored three goals. Was named to the All-Star Game for the fourth time in his career.
2004: Started 21 games for the Crew.  Made his second straight appearance as an MLS All-Star and third of his career.
2003: Re-signed with the Crew in MLS. Assisted on four goals in 23 games.
2002-2003 – Loaned to Swiss club FC St. Gallen
1998-2002: Played 19 games for Bayer Leverkusen, scoring one goal. In 99-2000 season, appeared in five of six  Champions’ League games for Leverkusen, including three starts, twice earned MVP honors in games against Lazio and Maribor.
1998-99: After making the move to Leverkusen from the Tampa Bay Mutiny of MLS, he started in 10 of the last 11 games, and scored his first and only goal for the team in a 2-0 win against Vfl Bochum on May 9.
1998: Appeared in 18 games for the Tampa Bay Mutiny, recording three goals and an assist.
1997: Had one goal and six assists in 23 appearances for the Mutiny.
1996: Scored a goal and had two assists in nine games with the Mutiny in his rookie season, helping the team to the Eastern Conference Finals and the league’s best regular-season record.