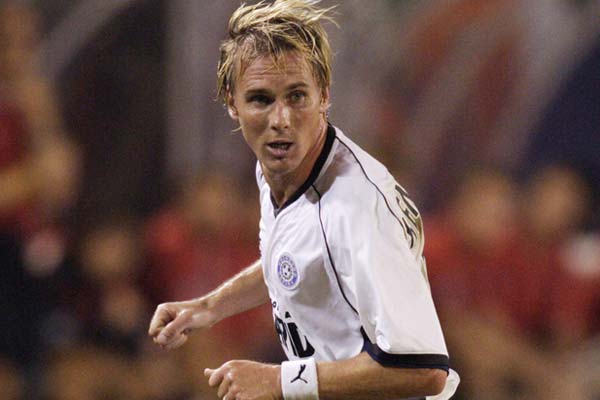 Chris Henderson was one of the top wing players in the history of Major League Soccer, having won an MLS Cup with the Kansas City Wizards in 2000 and a Supporters’ Shield with the Miami Fusion for the league’s best record during the 2001 regular season.

Henderson’s prowess on the left flank earned him 80 full international appearances since breaking into the full national team at just 19 years of age. He played on the 1990 World Cup team coached by Bob Gansler.

After an 11-year career in Major League Soccer and with a record 317 appearances, Henderson announced his retirement from professional soccer on December 22, 2006. He served as the technical director of the Seattle Sounders before moving to a similar role with Inter Miami in 2021.

2006: Played in all 32 regular season games for the New York Red Bulls. He scored three goals and added one assist.
2005: Traded to the Columbus Crew in May.
2004: Played a solid season with Colorado, a regular starter.
2003: Played 26 games, logging nearly 2,200 minutes, scored four goals and tallied three assists.
2002: Finished second on the team in scoring with 11 goals and 7 assists in 28 games.
2002: Selected by Colorado in MLS Dispersal Draft.
2001: Finished fifth on the Fusion in scoring with three goals and eight assists, helping the team to the Eastern Division title and the semifinals of the MLS playoffs after coming to Miami from Kansas City.
2000: Won the MLS Cup with the Wizards and led them in scoring with a career-high nine goals and nine assists for 27 points.
2000: Set career highs in games played (31), games started (30) and minutes (2694) and was named to the Western All-Star team.
2000: Became the 12th MLS player to play 10,000 minutes on April 19, 2000.
2000: Started all seven Wizards play-off games and scored in game three of the first-round series against Colorado.
1999: Recorded four assists on June 20 against the New York/New Jersey MetroStars to tie an MLS single-game record.
1999: Finished his first season in Kansas City ranked second on the team in minutes (2625) and assists (six) after being traded from the Colorado Rapids.
1998: Ranked second in assists (nine) for Colorado and led the Rapids to the first round of the playoffs.
1997: Finished the season tied for ninth in MLS in scoring with 28 points on seven goals and 14 assists.
1997: Named a starter for the MLS Western Conference All-Star team and led Colorado to the MLS Cup Final.
1996: Was named the Rapids season MVP after starting 29 games, scoring three goals, and adding a team-high eight assists.
1994-1995: Scored eight goals for FSV Frankfurt in the German Second Division.