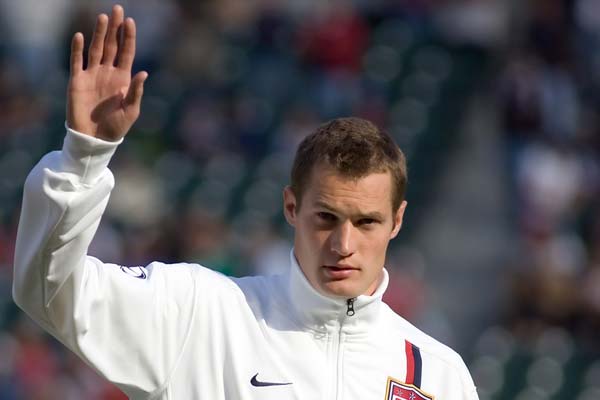 After totaling 21 goals in his first four seasons, powerful forward Nate Jaqua sent a message to the rest of MLS about his scoring abilities. That put the USMNT on notice as well, with Jaqua part of the squad as it approached 2010 World Cup Qualifying.

Jaqua started his career with the Chicago Fire, selected third overall in the 2003 SuperDraft. In late 2006 he was picked up by Toronto FC in the expansion draft, was then traded to the LA Galaxy, but quickly moved on to the Houston Dynamo in 2007 in a trade for Kelly Gray after less than half a season at LA. Won his first championship ring with the Dynamo as they beat New England 2-1 in the 2007 MLS Cup championship game. After spending part of the 2008 season in Germany, Jaqua returned to Houston, eventually joining the Seattle Sounders in 2009. With Seattle, he won three consecutive US Open Cups, adding to the two he won with Chicago early in his career.

2007: Made first start in 3-1 exhibition win over Denmark, but was subbed out at the half.
2006: Made his debut with the US National Team on January 29, coming on for the last 23 minutes of a commanding 5-0 victory over Norway.

2011: Won a third US Open Cup with Seattle. Left the club at the end of the season.
2010: Won the US Open Cup with the Seattle Sounders, named Player of the Tournament.
2009: Posted regular season career highs in goals (9), assists (7) and starts (27). Won the US Open Cup with Seattle.
2008: Resigned with Houston and recorded four goals and four assists in 14 games.
2007: Became an early victim of LA GM Alexi Lalas’ revolving door policy and was traded to the Houston Dynamo after scoring once in 12 games. Regained scoring touch for Houston, including hat trick in 4-3 win over Salt Lake, a vital playoff goal in the Western Conference final against Kansas City, and played in the MLS Cup final win over New England.
2006: After scoring eight goals to go with two assists in 28 games in an All-Star season for the Chicago Fire, he was selected in the 2006 MLS Expansion Draft by Toronto FC on November 17. Less than a month later, he was dealt to the Los Angeles Galaxy on December 15, 2006, for a portion of an allocation.
2005: Played in 21 games and started 17 games in the regular and post-season, scoring seven goals and adding three assists Missed playing time in the middle of the season with a knee injury.
2004: Played in 26 regular season games (21 starts), scoring four goals and registering four assists.
2003: Played in 20 games (five starts) while registering two goals and two assists in his debut season.