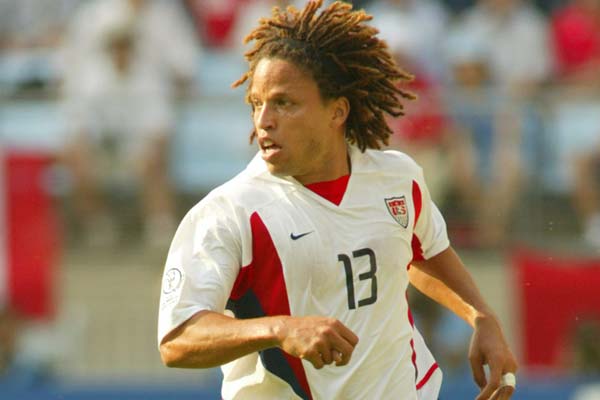 The United States’ all-time leader in caps, Cobi Jones appeared in 164 games for the US National Team between 1992-2004. He is one of the most reliable offensive players the US ever had, not to mention versatile, as Jones could play as a forward and on both sides of the midfield.  He was a fixture for the Los Angeles Galaxy from the founding of Major League Soccer in 1996 through its first 12 seasons, and is their all-time leading scorer.

His dreadlocks and colorful personality make Jones one of the most recognizable players in the US and one of the primary promoters of the sport in the country.

Jones retired as a player at the end of the 2007 MLS season, and almost immediately took the position of assistant coach to LA’s new team boss Ruud Gullit.  He stayed on with the Galaxy as the interim head coach when Gullit left, and served as an assistant when former US National Team coach Bruce Arena was hired.  In January 2011, the New York Cosmos announced Jones as their Associate Director of Soccer. That same year, Jones was elected to The National Soccer Hall of Fame.

“During the 1994 World Cup, I remember walking out to the field in my first start against Brazil. Knowing that I was facing off against Romario, Bebeto was simply amazing because I was a young kid from Southern California. The next thing you know that I’m walking out in front of 90,000 fans knowing that the whole World is watching us.” from Class of 2011: Cobi Jones

2004: Played four games, scored one goal. Currently holds all-time cap record.
2002: Made four appearances as a substitute in the 2002 World Cup.
2002: Started seven of 14 games for the U.S. with an assist on Brian McBride’s first goal in the 4-0 Gold Cup quarterfinal win over El Salvador.
2001: Started three World Cup Qualifiers and had 10 overall appearances with the national team.
2000: Led the national team in appearances, with 16, and scoring, with six goals and nine assists.
2000: Became the first player in 28 years to score in three consecutive games for the U.S. when he tallied against Chile, Haiti, and Peru.
2000: Played one of his finest games in a U.S. uniform, scoring twice against South Africa and setting up two others in a 4-0 win in Washington D.C.
2000: Set the all-time U.S. record by registering his 21st career assists.
1999: Nominated for Honda’s U.S. Player of the Year award.
1999: Started seven games and was a member of the Bronze Medal-winning U.S. team at the 1999 Confederations Cup.
1998: Won both the Honda U.S. Player of the Year award and the 1998 Chevrolet U.S. Soccer Male Athlete of the Year award after leading the team in appearances and starts in ’98.
1998: Played every minute for the U.S. of the 1998 World Cup in France.
1998: Became the youngest Men’s player in history to reach 100 international appearances on February 10, 1998 against Brazil in the CONCACAF Gold Cup at the age of 27.
1997: Started 10 matches for the U.S., playing 850 minutes.
1996: Played in 14 matches, starting 12 and recording two goals.
1995: Appeared in 12 games and registered one goal and four assists.
1995: Scored the game-winning goal in a 3-2 win over Nigeria in the U.S. Cup.
1994: After appearing as a substitute in the first round of the World Cup against Switzerland, Colombia, and Romania, Jones played the entire match in front of a home crowd on July 4 in a loss to Brazil.
1994: Started 19 of 23 matches, scoring two goals.
1993: Played in 30 games for the national team, with 16 starts, two goals and five assists.
1992: Played in three games for the U.S., recording a goal and two assists.
1992: Scored his first national team goal on October 9, 1992 against the Ivory Coast.
1992: Made his first national team appearance on September 3, 1992 versus Canada.
1991: Was a member of the gold medal-winning U-23 U.S. team at the 1991 Pan American Games.