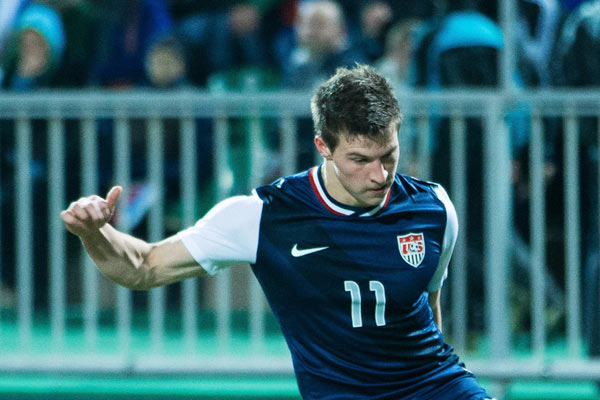 Josh Gatt bypassed college to join Austria’s Rheindorf Altach in 2010. A successful season led to an opportunity with Norway’s FC Molde and interest from the USMNT. Gatt debuted for the USMNT against Russia on Nov 14, 2012. He got a call up to the 2013 January camp and played against Canada. With his club, Gatt won back-to-back Tippeligaen titles in 2011 and 2012 qualifying for Champions League soccer. Injuries have limited Gatt’s availability, including a spot on the 2013 Gold Cup roster. He moved to MLS for the 2017 season before returning to Europe with his first club Altach. Gatt joined Dundalk in 2020, moving to Pittsburgh in 2021.

2013: Part of the USMNT January camp playing against Canada on Jan 29. Named to the Gold Cup squad but unable to play due to injury.
2012: debuted for the USMNT against Russia on Nov 14.

2020-21: Joined Dundalk in the Irish League. Left the club in November, signing with Pittsburgh for the 2021 USL season.
2018-19: Played 19 games for Altach.
2017: Joined Minnesota United, traded to Colorado before the season playing in 20 games and scoring twice.
2016: A 5th-place finish in his final season with Molde.
2015: Finished 6th with Molde.
2014: Won the Tippeligaen with Molde.
2013: Limited to 12 games due to injury.
2012: Played in 19 games with Molde scoring 5 goals and winning back-to-back league titles. Made 5 appearances in the Champions League.
2011: Won the Tippeligaen title in his first season with Norway’s FC Molde. Played in 22 games and scored 3 goals.
2010-11: Started his pro career in Austria with 2nd division club SCR Altach playing in 15 games and scoring 4 goals.