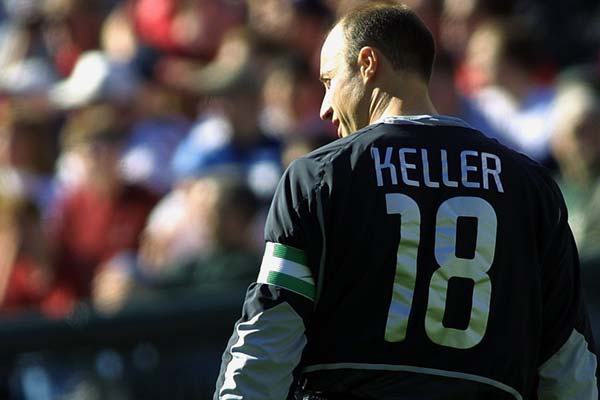 One of the most internationally experienced players ever, Kasey Keller spent significant time abroad in England, Spain and Germany developing his skills as one of the top goalkeepers in the world over 19 professional seasons.

Since bursting onto the scene at the 1989 World Youth Championship, Keller has been a part of some of the greatest wins in USMNT history, including shutouts of international giants Argentina (twice) and Brazil. He also pulled off some incredible saves as the nine-man US team held eventual champions Italy to a 1-1 tie in the 2006 World Cup group game.

Keller re-emerged as one of the top goalkeepers anywhere when he moved to Borussia Moenchengladbach of the German Bundeliga in the winter of 2005. While also leading the USMNT through World Cup qualification, he quickly helped ‘Gladbach fight off relegation with his stellar play. For his efforts, Keller was named captain of the side going into the 2006-07 season.

At the start of the 2007-08 season, Keller signed with English Premier League side Fulham, but after a handful of appearances ruptured the bicep tendon in his left shoulder, an injury that kept him out until February 2008.  At the end of the season he signed with MLS expansion club Seattle for the 2009 season,  Keller remained eligible for the USMNT, choosing not to announce his international retirement.

In 2011, Keller finally hung up the gloves, finishing as Goalkeeper of the Year for MLS as a member of the Seattle Sounders.  He was named the color commentator for the Sounders in January, 2012 and is part of the panel for ESPN broadcasts.In 2015, Keller won election to the National Soccer Hall of Fame.

2007: Part of the Gold Cup winning squad and Copa America.
2006: Started all three games for the US at the 2006 World Cup, including stellar performance in the 1-1 tie with Italy. Overall, he made seven appearances for the US.
2005: Won second Honda US Player of the Year Award … Keeper of choice for National Team coach Bruce Arena, leading the U.S. through qualifying to the 2006 World Cup, appearing in 15 games.
2004: Played seven of eight World Cup Qualifiers.  Reached milestone of 14 shutouts in 25 World Cup Qualifying games.
2004: Set the U.S. record for career victories with 39, breaking the record previously held by Tony Meola.
2003: Set the U.S. record for career shutouts with 34, breaking the record previously held by Tony Meola.
2003: Appeared in seven games with the U.S. winning six and earning five shutouts.
2002: Started all five games of the 2002 Gold Cup and earned four shutouts including brilliant performance making two penalty kick saves vs. Canada. Shut out Honduras 4-0 in homecoming in Seattle and split time in shutout of Jamaica at Giants Stadium. Named to 2002 World Cup roster but did not appear in a game
2001: Saw action in four World Cup Qualifiers and posted three consecutive shutouts against Costa Rica, Jamaica, and Trinidad & Tobago.
2000: Led all U.S. goalkeepers with seven appearances, collecting four shutouts and three victories.
1999: Named U.S. Soccer’s 1999 Chevrolet Male Athlete of the Year for the second time in his career.
1999: Was a member of the bronze medal-winning squad at the 1999 FIFA Confederations Cup in Mexico where he was named the top goalkeeper in the tournament.
1999: Shutout Argentina, which required saving a penalty kick from Gustavo Lopez, for the second time in his career.
1998: Started the USA’s first two games in the World Cup against Germany and Iran.
1998: Displayed one of the greatest goalkeeping performances in U.S. history with a shutout of Brazil on February 10,1998, thwarting Brazilian star Romario on five different occasions.
1997: Helped lead the USA to their sixth World Cup finals appearance by registering six shutouts in nine qualifying starts, including a string of 562 shutout minutes.
1997: Received U.S. Soccer’s 1997 Chevrolet Male Athlete of the Year Award, leading the team through qualifying for the ’98 World Cup.
1996: Recorded three consecutive shutout victories in 1996 as the USA opened the semifinal round of World Cup ’98 qualifying.
1996: Allowed just three goals in seven games with five shutouts.
1996: Captained 1996 U.S. Olympic team to a ninth-place finish, including a 2-0 shutout of Tunisia.
1995: Helped stun Argentina 3-0 in the 1995 Copa America in Uruguay.
1990: Was the backup goalkeeper to Tony Meola on the 1990 World Cup team.
1990: Made his first full international appearance on February 4 against. Colombia, losing 9-8 on penalty kicks.
1989: Won the Silver Ball at the 1989 World Youth Championship in Saudi Arabia after leading the U.S. under-20 team to a fourth-place finish.

2011: Played his final pro season, closing out his career with the Seattle Sounders by playing in 42 games in all competitions and winning the US Open Cup. Named MLS Goalkeeper of the Year.
2010: Played in all 32 regular season games recording 11 shutouts.  Part of another US Open Cup winning squad with Seattle. Keller won the MLS Save of the Year award for a save against Kansas City on April 17th.
2009: Started the MLS All-Star Game and was a finalist for MLS Goalkeeper of the Year.  Went 457 minutes without giving up a goal to start the season, finishing with 10 shutouts in 29 games. Won the US Open Cup.
2007-08: Signed for EPL side Fulham, but suffered shoulder injury in training that kept him out for several months.  Joined the Seattle Sounders for the 2009 MLS season.
2006-07: Though strong individual performances highlighted his season, Borussia Moenchengladbach suffered a run of bad results and were relegated.  Keller was released at the end of the season.
2005-06: Revitalized ‘Gladbach’s efforts in the Bundesliga, recording four shutouts in the first half of the 2005-06 season, helping to elevate them to the top half of the table.
2004-05: Frozen out as a starter at Tottenham. Went on loan to Southampton for one month.  Moved to Germany during the winter transfer window. Helped Borussia avoid relegation.
2003-04: Started every league and cup match again for Tottenham and played every single minute of every match during the season.
2002-03: Started every league and cup match (41) for Tottenham and played every single minute; one of five goalkeepers to do this in the English Premier League
2001-02: Signed on a free transfer with Tottenham Hotspur of the English Premier League starting nine games.
2000-01: Played 23 games for Rayo Vallecano.
1999-2000: Helped newly promoted Rayo, by playing 28 games, stay up in the Spanish First Division with a surprising ninth-place finish.
1999-2000: Signed with Rayo Vallecano at the beginning of the 1999-2000 season on a free transfer from Leicester City.
1998-99: Started 45 games for Leicester City in the English Premier League and allowed just 43 goals in 36 regular season games.
1998-99: Led Leicester City to the Worthington Cup Final, allowing only five goals in seven games before losing in the final to Tottenham, 1-0.
1997-98: Recorded 15 shutouts during the season, leading Leicester City to a tenth-place finish in the English Premier League.
1996-97: Won the League Cup with Leicester and piloted them to a ninth-place finish in their return to the English top-flight.
1996: Signed with Leicester City in August of 1996 after starring at Millwall for six seasons.
1994-1995: Played in 54 games, earning 15 shutouts in 1994-95 with Millwall.
1993-1994: Played in 51 games, earning 20 shutouts in 1993-94 with Millwall.
1990: Signed with Millwall following his final season at the University of Portland.