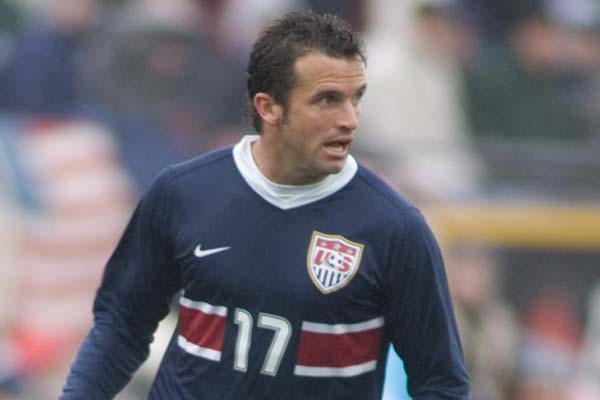 A quality wing player during his 13 MLS seasons, Chris Klein showed he could produce as an individual while working to supplement a team’s strength.  His play down the right side got him notice, but he was equally adept at working as a traditional midfielder and marking players with the USMNT.

His performance helped the Kansas City Wizards to a shocking upset of the Chicago Fire in the 2000 MLS Cup. Klein made two inspirational recoveries from a torn ACL — one in 2001 and another in 2004.

In 2005, Klein played perhaps his best season in MLS, posting career-highs in starts (31) and assists (9) while also tying his career-best in goals (7). His performance earned him the 2005 Comeback Player of the Year award for the second time (he won it in 2002) and several call-ups to the USMNT in early 2006.

As one of the better midfielders in MLS, Real Salt Lake made a play for him in January of 2006, trading a portion of an allocation to Kansas City to acquire him. In the middle of the 2007 seaosn he was traded to the LA Galaxy for Nathan Sturgis and Robbie Findley. Klein retired following the 2010 MLS season. He is currently the president of the LA Galaxy.

2006: Made six appearances for the USMNT, scoring two goals and registering two assists. Played as a temporary right back while Bruce Arena searched for new options in that position.
2004: Made two appearances with the USMNT.
2003: Appeared seven times for senior team, scoring three goals.
2002: Scored first international goal for against Canada in a 4-0 win.  Also scored against Jamaica and New Zealand.
2002: Returned to the USMNT with assist on game-winning goal against El Salvador.
2001: Played in four internationals, including a friendly against Brazil and a final-round qualifier against Mexico in Mexico City.
2000: Made his full international debut for the USMNT on October 25 against CONCACAF rivals Mexico without any previous international experience at any level.

2010: In his final season, appeared in 11 games with the Galaxy.
2009: Played in 28 games for the Galaxy.
2008: Started all 30 games for LA.
2007: In a 30-game season, actually managed 31 games by playing for both Salt Lake and LA. Scored two goals and registered four assists overall, though couldn’t help injury-hit LA into the playoffs.
2006: Played and started all 32 games for Real Salt Lake, scoring seven goals and registering eight assists.
2005: Started in 31 games for Kansas City, scoring seven goals and adding nine assists. Won his second Comeback Player of the Year award.
2004: Appeared in 19 matches for KC, scoring four goals and adding eight assists before suffering a season-ending ACL tear in his left knee in August.
2003: Finished third on Wizards in scoring with six goals and four assists, leading the team to the Western Conference final.
2002: Returned to the Wizards lineup from a torn ACL and started all 25 matches in which he appeared. Tallied seven goals and five assists.  Won Comeback Player of the Year Award
2001: Three goals and six assists in 27 games (26 starts) overall for the Wizards.
2000: Was a crucial part of the Wizards’ revival that ended when he set up the only goal in the MLS Cup final against Chicago. Overall played 34 games (33 starts), scoring six goals and registering ten assists.
1999: Scored six goals and notched five assists in second season, playing 30 games (24 starts)
1998: Was a first round draft pick by the Wizards, starting eight games during his rookie season.