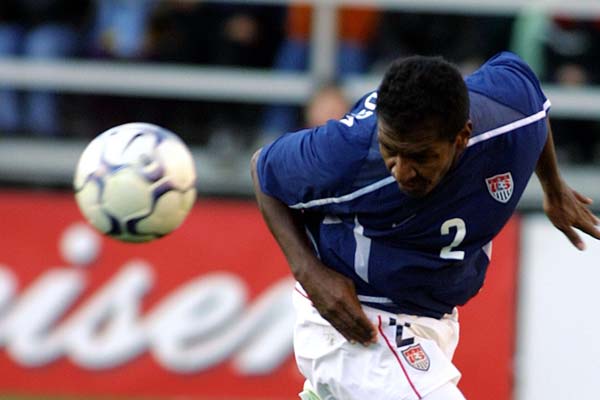 Dubbed by USMNT coach and former DC United coach Bruce Arena as the best man-marker in MLS, Carlos Llamosa wasted no time becoming a regular with the USMNT after becoming a US citizen in 1998.

Llamosa was part of two MLS Cup-winning teams with United, and in 2001 he led a Miami Fusion defense that was hailed as one of the best in the league. His defensive skills and extensive professional experience in both the US and Colombia made Llamosa one of the most highly-regarded American defenders during his National Team career.

After taking the 2005 season off, Llamosa was summoned back to Major League Soccer to play for Chivas USA under Bob Bradley, who was an assistant coach with DC United when Llamosa was there. Injuries continued to plague him through 2007, and he retired at the end of that season.

2002: Appeared in five games for the USMNT, including two substitute appearances at the 2002 World Cup. Assisted on Clint Mathis’ game-winning goal in 1-0 win over Mexico in Denver.
2001: Appeared in ten matches for the US on road to fourth consecutive World Cup finals place.
2000: Established himself as a key figure in the USMNT defense, starting nine games, more than any other defender. Earned MVP honors in a 0-0 draw against Costa Rica in a World Cup qualifier.
1999: Was a member of the USMNT squad that won the bronze medal in the 1999 FIFA Confederations Cup.
1998: Made his first appearance with the USMNT against Australia in November , 14 days after earning his US citizenship.

2007: Missed entire year at Chivas USA due to pre-season injury. Retired at the end of the season.
2006: Played 13 games (11 starts) for Chivas USA. Registered one assist.
2005: Did not play.
2004: Injured most of the season.
2003: Played 27 games overall for Revs (26 starts).
2002: Despite battling injuries much of the season, played 14 times for New England and appeared for the USMNT in the MLS All-Star Game.
2001: Traded from DC United to the Miami Fusion. Made 26 starts overall.
2000: Played 23 games (20 starts) as DC failed to make ploayoffs for the first time. Scored twice.
1999: Won his second MLS Cup with DC United. Made 19 starts overall, scoring once and registering an assist.
1998: Made 24 starts for DC overall as they lost MLS Cup.
1997: Selected by United coach Bruce Arena in the first round of the MLS Supplemental Draft and went on to win the 1997 MLS Cup with the club. Played 30 games (25 starts) overall.
1996: Selected to the A-League All-Star team as a member of the New York Fever.
1995: Played his first professional season in the US with the New York Centaurs of the A-League.
1990: Played in the Colombian First Division with Huila.
1986: Made professional debut with Colombian Third Division side Colmena.