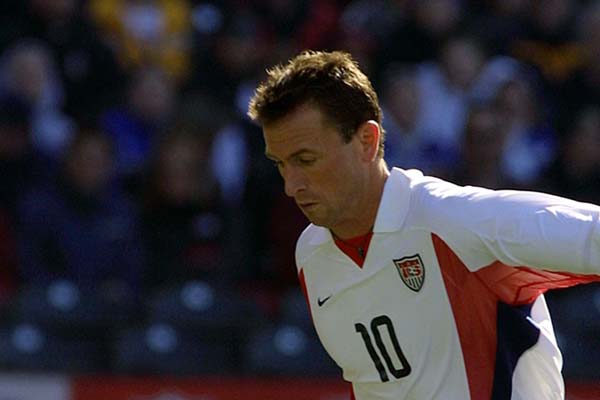 Brian Maisonneuve emerged as one of the top holding midfielders in MLS despite having forced to overcome several injuries. A mainstay in the Columbus Crew midfield after missing the entire 2000 season with an ankle injury, Maisonneuve retired as a member of the club in 2004. An Olympian, Maisonneuve played in all three games for the USMNT in France ’98. Maisonneuve became coach of Ohio State in April, 2018.

2004: Saw limited action throughout the  year before announcing his retirement at the end of the season.
2003: Played  23 games, starting 20; scored one goal in over 1,700 minutes in the heart of  Columbus’ midfield.
2002: Helped lead the Crew to their first Lamar Hunt  U.S. Open Cup trophy.
2002: Scored a goal and had six assists in 26  games.
2001: Helped the Crew to a second-place finish in the Central Division in 2001, his first year back from injury, earning Player of the Month honors in August.
1997: Became one of only a few MLS players to garner an assist in five consecutive games, registering a total of nine assists and three goals on the season.
1996: Allocated to the Columbus Crew in inaugural year  of MLS

Youth and College: Was a Parade All-American as a senior at De La Salle High School in Warren, Mich. Attended Indiana University “because of the reputation of both the soccer program and the business school.” Maissoneuve won the 1994 Hermann Trophy as top collegiate soccer player as a senior at Indiana, also finished third in the balloting for the Missouri Athletic Club Player of the Year Award. A two-time All-American and Big Ten MVP, a three-time first-team All-Big Ten selection, Maissoneuve finished at IU as the all-time leading goal scorer in Big Ten history with 44. Maisonneuve, nicknamed Maze, won the Herman Trophy at  Indiana University as a senior in 1994.