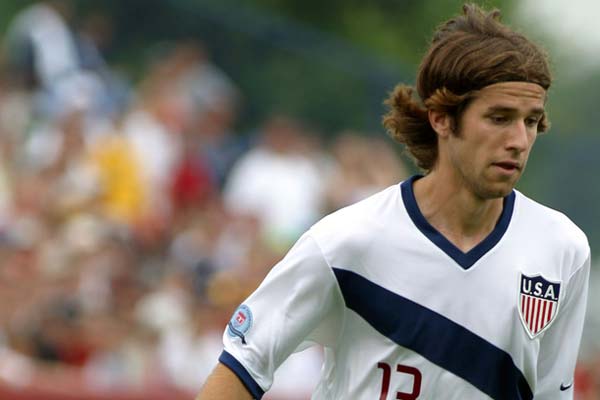 Kyle Martino spent seven seasons in Major League Soccer, making eight appearances with the USMNT. After leaving the University of Virginia for the Columbus Crew, Martino used his dazzling ball skills to become a regular in the squad. After a trade to Los Angeles in 2006, Martino continued his regular appearances in the play making role. Martino retired following the 2007 season based on medical advice.

After his playing career, Martino turned to broadcasting. He currently works for NBC Sports Network and can be seen on their Premier League studio show. Martino previously worked for ESPN and for the Philadelphia Union’s local broadcasts.

2006: Last appearance to date for the US came as a late sub in 4-0 exhibition win over Guatemala in February.
2005: Earned four caps with USMNT (one start), scoring his first goal in a 2-0 exhibition win over Panama in October in Foxboro, Massachusetts.
2003: Made two appearances for senior team (one start).
2002: Made his USMNT debut as a sub in 2-0 win over El Salvador on November 17.
2001: Played in two of four matches at the U-20 World Youth Championship in Argentina.  Scored the equalizer in a 1-1 tie against Costa Rica in CONCACAF qualifying; started all three games at the world-renowned Toulon Festival in
France and assisted on the first goal in a 2-1 come-from-behind win against Italy.
2000: Played in 17 matches for the U-20s in 2000, starting 15 and totaling six points (2g, 2a) on the year.
1999: Played in 16 matches with the Under-18s in 1999, starting 14 (2g, 2a).
1998: Began his international career with the U-18 National Team, appearing in 14 of the teams 18 matches, starting 11 of them.
1998: Tallied two goals and five assists and scored in his first international goal in a 4-1 win over Norway at the Piestany Tournament in Slovakia.

2007: Scored three goals, registered one assist for LA Galaxy in 26 games (25 starts). Retired at the end of the season.
2006: Played 15 games (ten starts) in MLS overall after being traded mid-season from Columbus to LA. Tallied one goal for the Crew, and an assist for LA.
2005: Made 27 starts for Columbus, registering eight assists.
2004: Appeared in 29 games (27 starts) as Crew took Supporters’ Shield. Tallied five goals anbd two assists in 31 games overall (29 starts).
2003: Scored two goals and tallied four assists in 22 games (20 starts).
2002: Named MLS Rookie of the Year after scoring two goals and registering seven assists in 26 games overall (16 starts). Selected eighth overall in SuperDraft by the Crew.

Youth and college: A four-year letter winner at Staples High School; Gatorade National Player of the Year and Parade All-American his senior year. Played 1999-2001 at the Univerisity of Virginia. Nnamed ACC Player of the Year and a Hermann Trophy finalist in 2001. Named the 1999 ACC Rookie of the Year, First-Team All-ACC selection, and chosen to the ACC All-Tournament team. Played with former U-20 teammates Alecko Eskandarian and Kenny Arena at the University of Virginia.