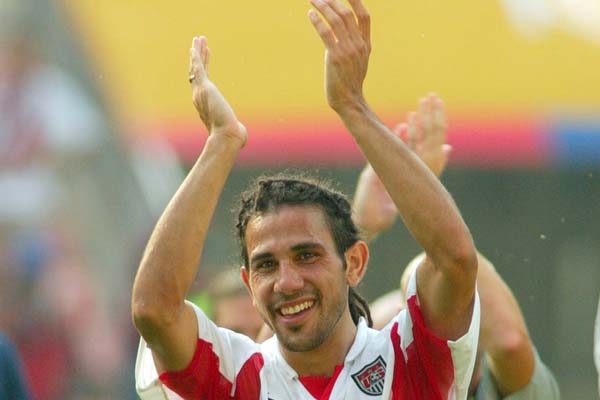 Pablo Mastroeni made his initial impact in pro soccer as a member of the Miami Fusion, partnering fellow USMNT player Carlos Llamosa. Mastroeni turned that run of form into a shot with the full USMNT.

After a breakout performance at the 2002 World Cup in Korea, Mastroeni emerged as a rock in the defensive midfield for the USMNT and the Colorado Rapids. He played in his second World Cup for Bruce Arena in June of 2006, and had a major role in the 2007 Gold Cup win.

Mastroeni won the 2010 MLS Cup with the Rapids. With 225 appearances with Colorado, Mastroeni spent his final season with the Los Angeles Galaxy. He retired in 2013 and joined the Rapids front office staff as special assistant to the Technical Director. He became the team’s head coach at the start of the 2014 MLS season. Mastroeni left the Rapids in Aug, 2017. He joined the Houston Dynamo as an assistant coach in Nov, 2019. Mastroeni moved to Real Salt Lake as an assistant in 2021, taking over as interim coach in August and leading the team to the Western Conference finals. He got the RSL job permanently in December, 2021.

2009: Started both June Qualifiers.  Part of the squad for the Confederations Cup.
2008 – Earned his 60th cap captaining the National Team against Guatemala on Nov. 19th in Commerce City, CO.
2007: Made seven starts, including four at the Gold Cup. Captained team in February exhibition win over Mexico.
2006: Appeared in seven matches for the US. Started against the Czech Republic and Italy for the U.S. at the 2006 World Cup.  Miss the decisive match versus Ghana due to a red card received in the 1-1 tie against Italy.
2005: Played in 11 matches, including six final round qualifiers (five starts). Won MVP honors in the 0-0 qualifying draw on away to Guatemalain September when he wore the captain’s armband.
2004: Made his first three World Cup Qualifying appearances.
2003: Played 11 games (ten starts).  Played in all five matches in USA’s third-place finish in Gold Cup.
2002: Played 12 times (11 starts), including three starts against Portugal, Mexico, and Germany at 2002 World Cup.
2001: Earned his first cap against Ecuador on June 7, 2001, just weeks after attaining his US citizenship.

2013: After playing seven games for the Rapids, traded to LA on Jun 17.
2012: Injury limited him to two appearances.
2011: Played in 30 games for Colorado.
2010: Won MLS Cup.
2009: Scored his first goal in four years against Chivas USA.
2008: Made the All-Star team for the ninth straight year and named team MVP with Colorado.
2007: Plated 23 games (21 starts) as the Rapids missed out on the playoffs. Became all-time league-leader in yellow cards received.
2006: Played 23 games, all starts, as the Rapids reached the Western Conference playoff final.
2005: Injuries and National Team limited him to 17 appearances (15 starts) overall as the Rapids made the Western Conference playoff final.
2004: Made 19 starts overall. Named captain in September after John Spencer relinquished the role.
2003: Started 18 games for the Rapids, recording two assists.
2002: Started just 20 games overall due to World Cup involvement. Registered three assists and led Rapids to the second round of the MLS playoffs.  Taken first overall in MLS contraction draft by the Colorado Rapids.
2001: Helped the Miami Fusion to a league-best 16-5-5 regular season record and the MLS Cup semi-finals. He scored two goals in the 2001 season, the first two of his MLS career.
2000: Started first eight games at defensive midfield before moving to central defender and led the club in minutes played (2661) over 29 starts.
1999: Sat out start of the season due to a hip flexor injury, but returned to start and play the full 90 minutes in 21 of the Fusion’s final 25 regular season and playoff games.
1998: Made his MLS debut with the Miami Fusion as a substitute against eventual MLS Cup champions Chicago Fire. He started both of the Fusion’s playoff games vs. DC United. Played 25 games (19 starts), and registered four assists.