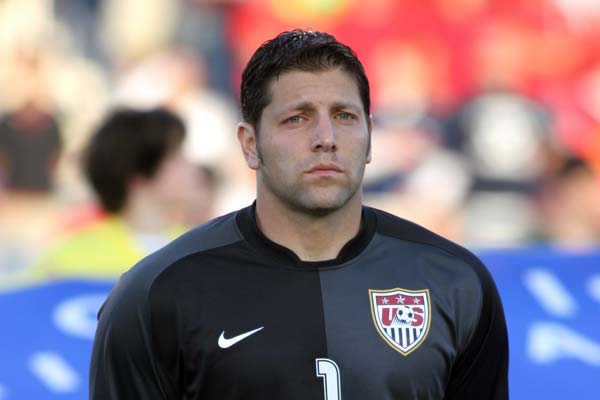 For the better part of the 1990’s, Tony Meola was the starting goalkeeper and one of the best-known faces of the USMNT.  His ability to marshal his defenders and see the opposition’s attack as it develops has made him one of our most consistent keepers ever, and it’s no surprise that he was the only American to be named a FIFA World All-Star for the match against the 2002 World Cup hosts.

An iron man at the club level, Meola didn’t miss a game from the start of the league in 1996 until the end of the 1998 season.  His play in the 1994 World Cup was a big reason for the US advancement to the second round. After not making the US team that played in the 1998 World Cup, Meola’s stellar play at the club level for the Kansas City Wizards in 1999 when he was the MLS Most Valuable Player led him back into the National Team. His college coach at the University of Virginia, Bruce Arena, selected him as one of the three goalkeepers he brought to the 2002 World Cup.

In 2006 he won his final and 100th cap for the US. Meola is now playing indoor soccer in the MISL with the New Jersey Ironmen. In 2012, he was elected as a first ballot inductee to the National Soccer Hall of Fame. After working as a pundit and hosting a radio show,Meola became the head coach of the NASL’s Jacksonville Armada for the 2016 season.

2006: Earned his 100th cap on April 11 in a 1-1 draw with Jamaica in Cary, NC.
2002: Earned shutout against rival Mexico on April 3 in Denver and finished shutout of Jamaica after coming for Kasey Keller in the second half against Jamaica on May 16. Back-up goalkeeper at the Gold Cup, he did not see any time as Keller played all five matches.  Named as alternate to 2002 World Cup squad.
2001: Played in three friendlies.
2000: Made four appearances, including a shutout win over Barbados in World Cup qualifying.
1999: After over four years away from the squad, he returned to the national team with a fine run of form for Bruce Arena’s side, including a shutout win against Germany.
1994: Played every game in his second World Cup, helping the US reach the round of 16.
1993: Started in goal when the US shocked England in the US Cup.
1990: Played every minute for the US in the 1990 World Cup.
1989: Got his first shutout against Peru during the Marlboro Cup on June 4.
1988: Made his international debut while still in college against Ecuador on June 10.

2006: Went 2-9-9 with five shutouts and a GAA of 1.45.
2005: Picked up off waivers by New York in late June.  Went 6-5-4 with two shutouts to lead the MetroStars into the playoffs.
2004: Played the first part of the season for Wizards before facing injury just before the playoffs.  21 games, seven shutouts and a GAA of 1.05. Released by team at the end of the year then underwent achilles tendon surgery at the end of the year.
2003: Played 30 games for the Wizards, posting 11 wins and a 1.42 goals against average.
2002: Posted a 6-5-5 record during the regular season, missing  nearly two months at the 2002 World Cup. Set MLS record with two penalty kick saves against DC United in August. 17 games, three shutouts, GAA of 1.24.
2001: Only played in 17 games due to injury, but still managed four shutouts and a 1.64 goals-against average.
2000: Returned from injury with one of the greatest single season performances in MLS history.  He had a 681-minute shutout streak and started 31 games with 16 shutouts.  Held the Chicago Fire scoreless to win the MLS Cup and was named league MVP. GAA was 0.92 in the regular season, 0.55 in the seven playoff games.
1999: Traded to Kansas City on January 28.  Played only nine games due to a knee injury. GAA was 1.18.
1998: Led MLS in saves and shots faced while earning Soccer America Goalkeeper of the Year honors, despite a GAA of 2.00 in 31 games with New York.
1997: Played 30 games, with a 1.61 GAA.
1996: Allocated to the New York/New Jersey MetroStars (now RB New York) for the first season of Major League Soccer.  He finished the season with nine shutouts, earning fourteen wins while serving as team captain. GAA was 1.31 in the regular season, 1.67 in the playoffs.
1995: Was a member of USISL champions Long Island Rough Riders.
1991: Played for the American Professional Soccer League’s Fort Lauderdale Strikers.
1990: Played in England with Brighton & Hove Albion.