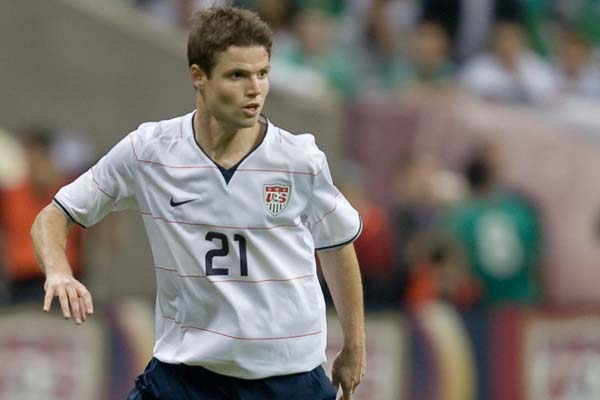 Drew Moor is a strong presence in defense, capable of playing the traditional role of stopper while working his way into the attack. A two-time collegiate national champion, Moor is known for staying in games. He holds the consecutive complete games played record in MLS and won the 2010 MLS Cup with Colorado. At USMNT level, he was a regular at U-20 level before joining the senior squad in 2007.

2008: Called into January training camp. Played full 90 in 2-0 exhibition game win over Sweden, then again in 2-2 tie with Mexico the following month in Houston. Set up Jozy Altidore’s goal with a pinpoint, cross-field pass.
2007: Named to the Copa America roster, earning his first cap against Paraguay on July 2nd and his second cap against Colombia on July 5.
2003: Regular member of the Under-20 National Team and played in the World Youth Championships.

2019: Played in 13 games with Toronto, signing with Colorado as a free agent following the season.
2018: Made eight appearances with Toronto due to injuries.
2017: Won the MLS Cup, Supporters’ Shield, and Canadian Championship with Toronto.
2016: Joined Toronto FC, playing in 32 games and making the MLS Cup final.
2015: Had 22 games with the Rapids.
2014: Made 23 appearances with Colorado.
2013: Played in 32 games for the Rapids, starting 31 and scoring three goals.
2012: Played in all 34 games for Colorado and every minute of the season. Named Colorado’s Defender of the Year.
2011: Played in 32 games and scored four goals. Set an MLS record by playing in his 68th consecutive complete game.
2010: A regular with Colorado in a season where they won the MLS Cup. Had one regular season goal.
2009: Traded to the Rapids in September where he had eight appearances.
2008: Started 27 games for FC Dallas.
2007: A very solid season with FC Dallas, making 30 starts in both the regular season and the playoffs. Scored two goals and avoided suspension with just three yellow cards.
2006: Won the starting job in Dallas and scored his first professional goal on May 6th.
2005: Drafted by FC Dallas as the 6th overall pick.

College and High School: Won national championships with Indiana in 2003 and 2004.  Played with the Chicago Fire reserves in the Premier Development League. Member of Furman’s soccer team along with Ricardo Clark and Clint Dempsey, and named Southern Conference freshman of the year before transferring to Indiana.  Played for Episcopal School of Dallas and Solar Soccer Club.  Named local high school player of the year.