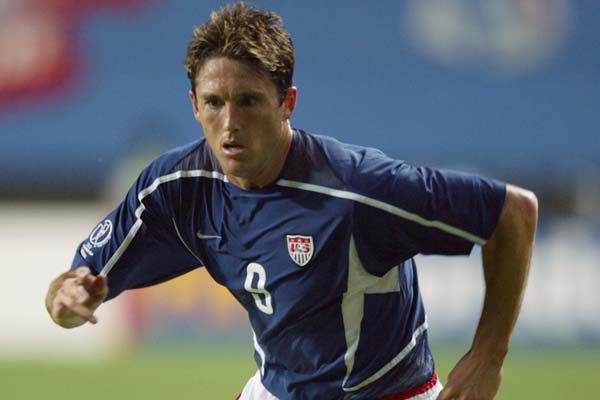 One of the best American players of his generation, Joe-Max Moore was a regular in Bruce Arena’s squad from 1998-2002. He starred for the New England Revolution of Major League Soccer before seizing an opportunity to play in the English Premier League.

His 24 goals with the US National Team place him third among the all-time leaders in American soccer. He forever ingrained himself in the memories of US soccer fans with two goals against Jamaica that helped the U.S. clinch a berth in the 2002 World Cup.

Moore retired in 2005 after surgery to a damaged right knee. He was elected to the National Soccer Hall of Fame in 2013.

2002: Became sixth player in U.S. history to earn 100 caps with appearance vs. Poland.  Appeared in two games at 2002 World Cup as a substitute vs. Portugal and Poland.
2001: Returned to Foxboro to score both goals in US 2-1 victory over Jamaica, securing World Cup qualification.
Appeared in eight of ten World Cup qualifiers.
2000: Played just four games for the US due to club commitments, but scored twice against Barbados in August at Foxboro.
1999: Scored goals in both US upset victories over Argentina and Germany.
1998: Integral part of the US team that reached the final of the Gold Cup.
1996: Netted four goals for the national team, including the game-winner in a 1-0 World Cup qualifying victory against Trinidad & Tobago.
1995: Part of US team that reached the semifinal of the Copa America in 1995.
1993: Registered four goals against El Salvador on December 5, 1993, the first American to do so since 1934.
1993: Notched eight goals with the National Team in 1993, the most ever by an American in one year.
1993: Scored first international goal against Denmark on January 30.
1992: Played with the US Olympic team, scoring a goal against Italy in the tournament’s opening match.

2005: Announced retirement after surgery on right knee.
2004: Made just three starts for the Revs, registering a brace of assists.
2003: Returned to MLS to play for New England Revolution. Scored four goals and tallied seven assists ion 16 games (13 starts).
2000-2002: Scored 10 goals in 37 matches with Everton.
2000: Signed with Everton of the English Premier League, scoring eight goals in his first season.
1999: Led the New England Revolution in goals with 15, and assists with eight.
1998: Seven goals and 15 assists in 21 starts for the Revs.
1997: Five goals and two assists for NE in 14 games overall (13 starts). Spent a month on loan to Ecuador first division side Emelec.
1996: Joined the New England Revolution. Scored 11 gaosl and registered an assist in just 14 starts.
1995: Signed with German club Nurnberg.
1994: Scored a team-high 13 goals in 25 matches with FC Saarbruecken.
1994: Made professional debut with FC Saarbruecken of the German Second Division.

Youth and college: Attended UCLA because of its academic and soccer tradition. Played with fellow U.S. Soccer Players Brad Friedel, Chris Henderson, and Cobi Jones at UCLA. UCLA’s leading scorer in 1992, his junior year, he was a unanimous All-America selection and a finalist for ’92 player of the year awards, before foregoing his final season to sign a professional contract.  Named to the Soccer America All-Freshman Team in 1990 and won NCAA Championship.  Four-year all-star at Mission Viejo High School, the same town as the USA’s full-time training camp in 1993-94.