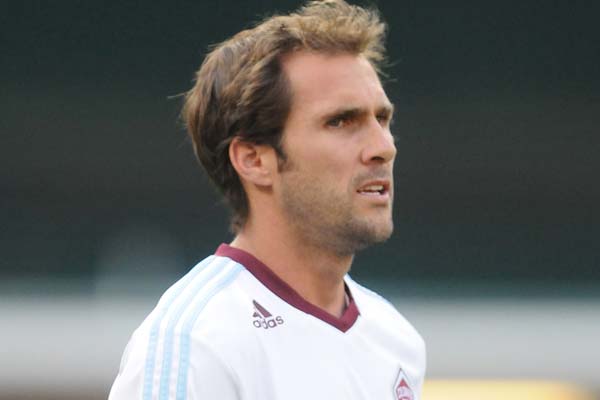 Capable of playing either up front or in midfield, Brian Mullan played on consecutive MLS Cup-winning teams, first with Los Angeles in 2002 and then with San Jose in 2003.  He then repeated this feat by winning the MLS Cup two years running with the Houston Dynamo in 2006 and 2007.

And considering that he played in every playoff game over those four seasons, the size of his jewelry collection is likely more than coincidental. The same can be said of his chemistry with fellow Earthquakes midfielder Richard Mulrooney, as the two played together for Creighton University in 1997 and 1998.

Although a dogged defensive player when required, Mullan is best to watch when he’s taking players on down the right flank. His crosses for Houston and San Jose have been one of the main reasons behind the teams’ effectiveness in attack. Mullan took his ability to win trophies with him to Colorado, winning another MLS Cup in 2010. He retired following the 2014 season.

2007: Won second cap coming on as a sub in the 0-0 exhibition tie with Guatemala.
2004: Earned his first cap when he came  on as a substitute in the 72nd minute against Poland on July 11.

2014: Retired at the end of the season with the Rapids.
2013: Played in 16 games with Colorado.
2012: Played in 28 games with the Rapids.
2011: Started 19 games for the Rapids
2010: Traded to Coloraod midway through the season becoming a crucial part of yet another MLS Cup winner.
2009: Played in 25 games for the Dynamo.
2008: Played 30 games for Houston.
2007: Won fourth MLS Cup with Houston. Made 32 starts in both regular and post season, playing through all four playoff games.
2006: Won MLS Cup with Houston in its first season after relocating from San Jose. Made 35 starts overall, scoring three goals and registering seven assists.
2005: Made 27 starts in both regular- and post-season in San Jose’s last season, scoring three goals and registering seven assists.
2004: Started 30 games  overall with three goals and eight assists.
2003: Made 34 regular- and post-season starts in the Earthquakes’ MLS Cup-winning campaign, notching seven goals and 11 assists.
2002: Won his first MLS Cup with the LA Galaxy, recording three  goals and two assists in 25 games overall (14 starts).
2001: Drafted by Los Angeles with the ninth overall selection in the SuperDraft. Played ten games and scored two goals before injury .