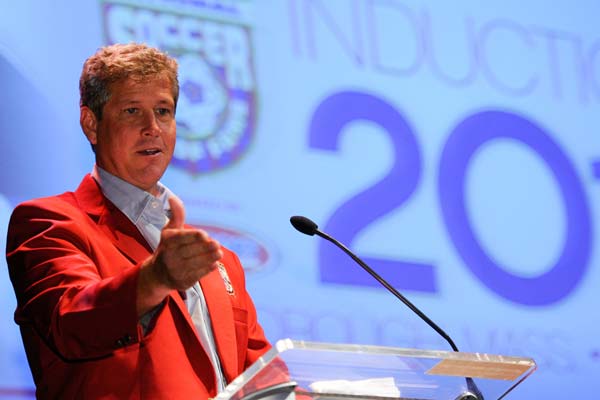 Bruce Murray was an integral part of American soccer during the ’80’s and ’90’s.  He set numerous records, and led the attack on many occasions. Not only was he a solid member of the US National Team, but he also played in on the 1988 Olympic soccer team. Murray was elected to The National Soccer Hall of Fame in 2011.

1993: In his final year with the US National Team, Murray played 12 games and scored two goals.
1992: Started and played 12 games, scoring two goals and one assist.
1991: Played 16 games, starting 15 of them.  Scored six goals, three assists.
1990: Had a breakout season, playing 20 games, starting 17.  He scored eight goals and added two assists for eighteen points total that year. Highest point total of career.  Was the only member of the US World Cup team to score and assist on a goal in World Cup games.
1989: Played and started 12 games, scoring two goals.
1988: Played eight games, starting five of them.
1988: Played in the Olympics in Seoul.
1987: Played and started three games.
1986: On February 7, scored first international goal in a 1-1 tie with Uruguay in Miami.
1985: Earned his first cap, a start, on June 16 in a 5-0 loss to England in LA.

College: Attended Clemson University. Murray earned national rookie of the year honors in 1984 after helping Clemson win the national title. Murray’s saved his best season for his senior year when he captured the Herrmann Trophy as well as earning All-America status for the second time and leading the Tigers to their second national title. During his senior campaign, he was named the ISAA National Player-of-the-Year and led the ACC in goals, points and was second in assists in 1987. He had the winning goal in three NCAA Tournament games for the Tigers against Evansville, Indiana and Rutgers respectively. During his stay in Death Valley he became the first member of Clemson’s 40-40 club (40+ goals, 40+ assists). A four-time All-ACC performer, Murray was inducted into the Clemson Hall of Fame in 1993.