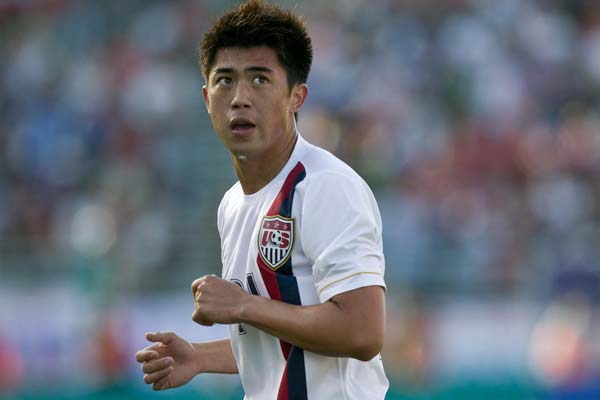 A standout at every level for the USMNT youth teams, Lee Nguyen joined the senior side in the summer of 2007. His pace and touch have always given him an advantage. Lee moved to Major League Soccer in December, 2011 and was allocated to Vancouver. He joined New England before the start of the 2012 season, moving to LAFC midway through the 2019 season. Inter Miami chose him in the expansion draft for their debut season in 2020. Nguyen returned to the Revs in September, 2020. Nguyen took a coaching role with the Washington Spirit in 2022, returning to his playing career in August.

2016: Started against Iceland on Jan 31 and Canada on Feb 5.
2015: Subbed on in the second-half against Chile on Jan 28 and Panama on Feb 8. Subbed on against Costa Rica on Oct 13.
2014: Returned to the USMNT, subbing in in the second-half against Colombia on Nov 14.
2007: Earned first cap against China on June 2nd, and named to the Copa America roster.  Came on as a substitute against Paraguay on July 2.
2005: Member of the Under-20 squad for the World Youth Championships while still in high school.

2020: Played in five games for Inter Miami before rejoining the Revs on September 8.
2019: Part of the LAFC squad that dominated the regular season on its way to the Supporters’ Shield. Exited the playoffs to eventual champions Seattle. Moved to Inter Miami in November’s expansion draft.
2018: Started the season with New England, moving to LAFC in May. Finished 3rd in the West exiting the playoffs in the knockout round.
2017: Finished 7th in the East with New England.
2016: Played in 33 games with the Revs, scoring six goals.
2015: Made the playoffs with the Revolution, exiting in the Eastern Conference knockout round.
2014: Had a standout season for the New England Revolution, helping them to an MLS Cup final appearance.
2013: Regular with the Revolution, playing in 33 games and starting 32.
2012: Picked up by New England in the waiver draft on March 2nd. Played in 30 games.
2011: Signed with MLS and allocated to Vancouver.
2010: After a proposed move to Major League Soccer didn’t work out, Lee signed with Becamex Binh Duong in Viet Nam’s V-League.
2008-09: Joined Randers in the Danish League where he played in 22 games.
2006-08: Signed with PSV Eindhoven but made only one appearance.

College and High School: Named Freshman of the Year by Soccer America while at Indiana in 2005.  Left after freshman year. Named Gatorade National Player of the Year in 2004.