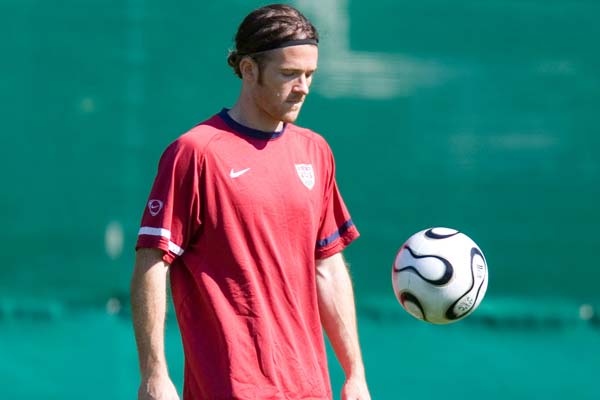 John O’Brien’s versatility in midfield allowed him to play both creative and holding roles or even on the wing, where his left-footed crosses make him a dangerous proposition.

O’Brien’s successful play overseas with one of Europe’s premier clubs, Ajax Amsterdam, enhanced his reputation as one of the most technically gifted US midfielders of his generation. His performance as defensive midfielder and play maker in the 2002 World Cup earned him numerous plaudits.

Despite injuries, O’Brien became the first American to play in the quarterfinals of the European Champions League.

In the spring of 2006, O’Brien signed with Chivas USA in Major League Soccer.  While injuries got in his way once again and limited his play with his new club to just one game, he was able to make Bruce Arena’s World Cup team in the summer of 2006.  O’Brien played in the second half of the team’s 3-0 loss to the Czech Republic in their opening game.

2006: Made four appearances with the US National Team, including 45 minutes of action against the Czech Republic in the World Cup.
2005: Played in seven matches and scored one goal in his long-awaited return to the US National Team. He was also a part of the team that won the 2005 CONCACAF Gold Cup.
2004: Did not see action due to season-long injury.
2003: Returned to play in the 2-0 win over Venezuela in Seattle.
2002: One of three players for the to play every minute (450) of the 2002 World Cup. Scored second career goal for the US with opening goal against Portugal on June 5, and assisted on Clint Mathis’ goal vs. South Korea.
Recorded an assist on Eddie Pope’s goal in a 2-1 loss to Ireland in Dublin on April 17.
2001: Played in five matches, including four crucial final round CONCACAF qualifiers for the 2002 World Cup.
2000: Scored his first full international goal in the 7-0 win over Barbados in the second round of CONCACAF qualifying. Played all 570 minutes of the 2000 Olympics, and helped lead the US to a first-ever fourth-place finish.
1999: Sidelined from full National Team duty with injuries and club commitments. Scored in his only appearance with the U-23s in a friendly against Liverpool.
1998: Received his first cap in a win over Austria in Vienna on April 22.  Earned an alternate role on the 1998 World Cup squad.
1995: Led the U-20 team to the second round of the 1995 World Youth Championship in Malaysia.
1993: Played on the U-17 team that placed seventh at the 1993 FIFA World Championships in Japan.

2006: Only saw action in five minutes of one game for Chivas USA due to a variety of nagging injuries after being signed in the spring. His last season in professional soccer.
2004-05: Released by Ajax at the beginning of 2005, signed on with Den Haag.
2003-04: A hamstring tear kept O’Brien out of action most of the season.
2002-03: Became the first American to play in the quarterfinals of the European Champions League against AC Milan.
2001-02: Fourth in minutes played for Ajax as the team won the Eredivisie and the Amstel Cup.
2001: Injured for much of the 2000-2001 season, returned in May to first-team action at right full-back.
1999: Made his first-team debut on September 15 in Ajax’s opening UEFA Cup match, subbing in for Aaron Winter in the 77th minute.
1998-99″ Spent season-long loan with FC Utrecht before injuring his foot at the end of the season.
1998: Signed three-year contract with Ajax in March of 1998.
1994: Joined Ajax’s youth training program in the summer after coach Co Adriaanse visited his home in California.

Youth and college: Attended Brentwood High School until he was 16.