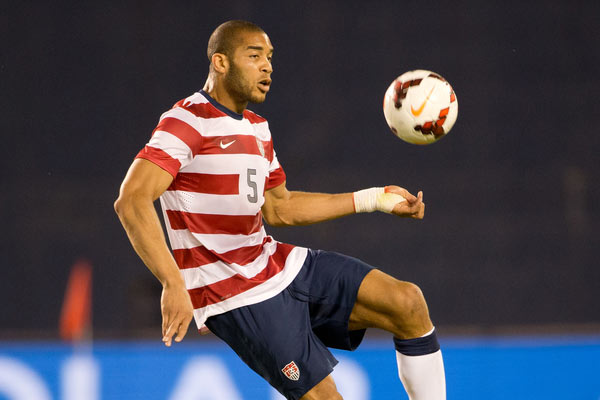 Oguchi Onyewu is a solid defender who is great in the air, and who can also probe forward and become a scoring threat.  He emerged as a regular part of the USMNT rearguard in 2005, and his ‘stare-down’ of Mexican striker Jared Borgetti proved one of the seminal moments of the 2006 World Cup qualifying campaign

Onyewu’s strong play at the 2006 World Cup drew interest from powerhouse clubs such as Chelsea, Real Madrid and AC Milan in the January 2007 transfer window.  However, Onyewu choose a loan move to Newcastle United of the English Premier League.  At the end of the season the team opted not to keep him, and he returned to Liege for the 2007-08 season.

A regular for Liege’s championship run in 2007-08, Onyewu was linked with multiple teams.  Instead, he remained a member of Liege,winning a second title in 2008-09.  On July 7th, 2009, Italian super club AC Milan announced they had signed Onyewu to a three-year deal.  Onywu was injured in the final game of World Cup Qualifying, missing the rest of the season with Milan but returning in time for World Cup camp. In January, 2011, he agreed to finish the season on loan to FC Twente in the Dutch Eredivisie.  On June 20th, 2011 Onyewu signed with Sporting. He spent the 2012-13 season on loan with Malaga in Spain’s Primera Division and left Sporting in August, 2013. In October, 2013 he signed with Queens Park Rangers, moving to Sheffield Wednesday in Jan 2014 and Charlton Athletic in 2014-15. He signed with Philadelphia for the 2017 MLS season. Onyewu announced his retirement on Sep 17, 2018. In December, he joined USL club Orlando City B as technical director. He currently works for CBS Sports as a commentator and is secretary general of Belgian club Royal Excelsior Virton.

2014: Started against Ukraine on Mar 5.
2013: Started against Guatemala on Jul 5 and Cuba on Jul 13.
2012: Subbed on against Scotland on May 26th.
2011: Started against Argentina on March 26th.
2010: Played in both Sendoff Series games and was named to the World Cup roster. Started against England and Slovenia. Scored in the Oct 9th friendly against Poland. Named captain for the Oct 12th game against Colombia.
2009: Once again partnering Carlos Bocanegra as the first choice central defenders in the US system. Huge in defense during the Confederations Cup, with a standout performance in the semifinal win over Spain. Injured his knee in the final game of World Cup Qualifying.
2008: Capped a fine 90 minutes against Mexico by scoring the game’s opening goal in 2-2 February exhibition game.  Scored against Cuba on Oct 11th.
2007: Member of Gold Cup squad, becoming regular starter with Carlos Bocanegra in central defense. Made 11 starts over the course of the year, scoring in exhibition win over China.
2006: Made six appearances, including three starts at the World Cup.
2005: Scored first US goal by heading home a Landon Donovan free kick in added time to beat Honduras and put the US side through to the Gold Cup final. Voted to Gold Cup Best XI. Started in four of six Gold Cup matches, including the final. Won MVP in 2-0 to win over Mexico in World Cup qualifier. Won nine caps over the course of the year.
2004: Called into camp multiple times.  Earned first cap as a reserve in the World Cup Qualifier against Panama in October.
2001: Was a key member in the U-20 World Cup in Argentina
1999: Led the US to a qualifying position in the CONCACAF U-17 World Championship
1998: Debuted with the U-17s against Guatemala. Scored first international goal in December against the Solomon Islands in New Zealand.