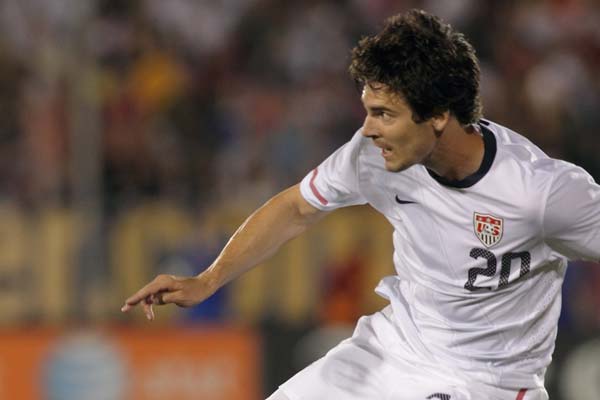 Heath Pearce has extensive experience at the international level as a member of the Under-20 USMNT in 2002 and 2003, while also participating on USMNT youth teams from 1999-2001.

After earning his first five caps under Bruce Arena, the standout left back is a top candidate to be summoned back into the side as the team looks forward to qualifying for the 2010 World Cup.  Pearce became a regular for Bob Bradley, playing more minutes than any National Team player in 2008.  Out of contract in the summer of 2009, Pearce was linked with a move to Bursaspor in the Turkish topflight before joining Major League Soccer with FC Dallas. He was traded to Chivas USA in February, 2011. On May 17th, 2012, Pearce joined the New York Red Bulls. He moved to Montreal for the 2014 season. In January, 2015 Pearce signed with IFK Goteborg but opted for retirement.

2012: Started against Venezuela on January 21st. Subbed on in the Jan 25th Panama game.
2010: Played in the January friendly against Honduras. Played in the Sendoff Series against the Czech Republic. Started against Colombia on Oct 12th.
2009: Started against El Salvador on March 28th. Part of the Gold Cup squad.
2008: Played in the 2-0 loss to England at Wembley on May 28th. Led the US in minutes played for 2008.
2007: Came on as a late substitute for Bob Bradley in the US team’s 3-1 victory over Denmark on January 20.  Named to the Copa America roster and started the July 5 game against Colombia. Also started in 2-4 loss at home to Brazil in a September exhibition match in Chicago, appeared as a sub in October exhibition win in Switzerland, and played through November road win in South Africa.
2006: Made four appearances for the US National Team under Bruce Arena.  Started two matches as the side’s left back.
2005: Made his debut with the U.S. national team during their 1-1 draw against Scotland on November 12.

2015: Signed with IFK Goteborg in Sweden but didn’t play. Announced his retirement.
2014: Joined the Montreal Impact, playing in 23 MLS games.
2013: Played in 14 games with New York.
2012: Traded to New York on May 17th, playing in 18 games.
2011: Traded to Chivas USA on February 15th for allocation money.
2010: A member of an FC Dallas squad that made it all the way to the MLS Cup final.  Pearce was injured in October and unavailable for the playoffs.
2008-09: In and out of the lineup with Hansa Rostock, who were relegated at the end of the season. Moved to FC Dallas in September.
2007-08: Moved from Nordsjaellend to newly promoted Hansa Rostock of the German Bundesliga, where he started the season at left back.  Made several starting and substitute appearances in the run-up to the winter break.
2005-06: Scored a goal and registered seven assists as Nordsjaelland’s starting left back.  Was part of the team that won the Viasat Cup.
2004-2005: Joined FC Nordsjaelland after the winter break and broke into the lineup as the team’s left back in his first season.

College: After starting both his freshman and sophomore seasons at Portland as a left-back defender, Pearce was asked to be more of a scoring threat and moved to an attacking midfield role as a junior in 2004. He responded by scoring five goals and adding five assists to become Portland’s third leading scorer. Pearce was named to the 2004 NSCAA Far West Regional second team and also garnered West Coast Conference second team honors. Pearce finished his career at UP with eight career goals and 11 assists.