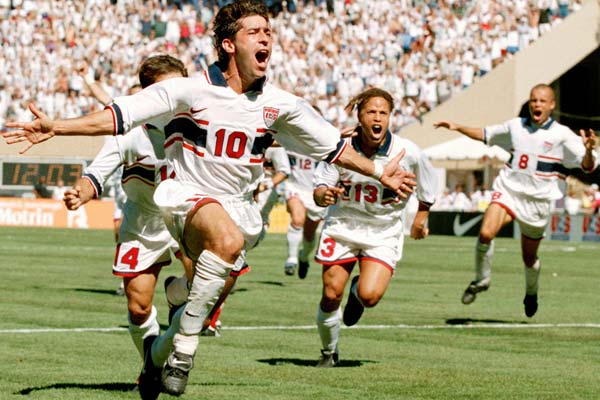 Rising from the soccer hotbed of Kearny, New Jersey, Tab Ramos is simply one of the best players to put on a National Team jersey. Unfortunately, injuries kept his skills off the field more than he or fans would have liked. He is remembered as much for the powerful goal against Costa Rica in 1998 World Cup Qualifying as he is for having his skull fractured against Brazil in the 1994 World Cup. Ramos was one of the first American players to establish himself in Europe and was the first player to sign with Major League Soccer.

Ramos was the first player in U.S. history (along with Eric Wynalda and Marcelo Balboa) to appear in three World Cups (1990, 1994 and 1998). He currently coaches the US Under-20 Men’s National Team. On March 30, 2014 USMNT coach Jurgen Klinsmann named Ramos an assistant coach for the World Cup. Ramos ended up becoming the Youth Technical Director for US Soccer, serving as U-20 coach. He was the coach of the Houston Dynamo from October, 2019 to November 4, 2021, taking the Hartford Athletic job on August 22, 2022.

2002: 4th-place finish, missing the playoffs. Retired as a member of the Metrostars.
2001: 2nd in the Eastern Conference.
2000: Part of a Metrostars team that finished 1st in the East, exiting the playoffs in the semifinal round.
1999: Member of the All-Star team in a year where the Metrostars finished 6th.
1998: Named to the All-Star team and made the playoffs.
1997: Tough year for the MetroStars, missing the playoffs.
1996: Allocated to the MetroStars, winning All-Star honors for the third-place club.
1995: First player to sign an MLS contract and loaned to Tigres in Mexico where he made 35 appearances and scored twice.
1994-95: Unavailable due to his World Cup injury, Ramos missed Real Betis’s season in La Liga.
1993-94: Won promotion with Real Betis, playing 59 times over two seasons.
1992-93: Transferred to Real Betis in Segunda B
1991-92: US Soccer sold Ramos’s rights to Figueres for $250,000 and he played 34 games scoring four times.
1990-91: After signing with the USMNT who had players on contract, US Soccer loaned Ramos to Figueres in Spain’s second division (Segunda B). Ramos made 38 appearances scoring five goals.
1989: Briefly played with the Major Indoor Soccer League’s Miami Sharks.
1988: Played in eight games for the American Soccer League’s New Jersey Eagles.