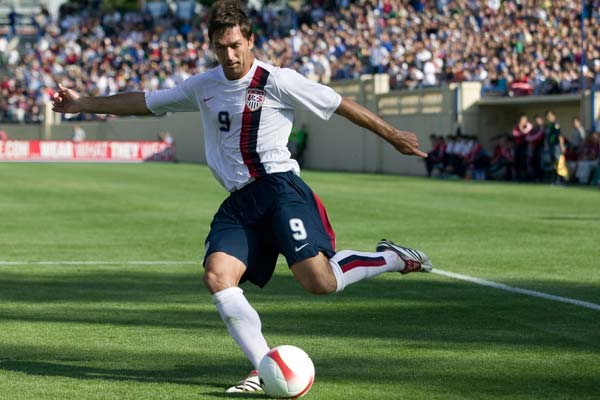 Ante Razov was one of the sharpest strikers in Major League Soccer’s history.  With an eye for goal and the ability to make things happen late in games with his powerful left-foot, Razov was known as a big-game player. In total, he scored 114 goals in MLS with five different teams.

In addition to being a member of the 1998 Chicago Fire MLS Cup championship team, Razov also won three Lamar Hunt US Open Cup championships with the Fire, in 1998, 2000 and 2003.  He was selected to play the MLS All Star game in 2000, and holds the record for most goals scored in Chicago Fire history. In three seasons at Chivas USA he has been top scorer, and lead the side from the front to the Western Conference playoffs, and its first Western Conference regular season title. Razov didn’t re-sign with MLS following the 2009 season and officially retired in 2011. In 2015, he became an assistant coach with the Seattle Sounders. In 2017, he joined the LA Galaxy coaching staff. In 2022, he became an assistant with LAFC.

2007: Returns to the National Team for the May friendly against China.
2004: Played two games, starting one of them.
2002: Had a goal and assist in three matches.
2001: Appeared in five World Cup qualifiers, scoring against Trinidad & Tobago.
2000: Scored his first international goal in a friendly against Ireland before adding two more in his next games versus Mexico and Guatemala.
1999: Played in the U.S. Cup, partnering Brian McBride.
1995: Won his first cap against Uruguay on March 25, 1995.

2009: Part of a strong Chivas USA side that faded late in the season.  Did not re-sign with MLS after the season, finishing with 114 career goals.
2008: Started 17 games (22 total appearances) for Chivas USA with five goals.
2007: Outstanding season for Chivas USA, scoring 11 goals and registering eight  assists in 26 games (24 starts), helping his team to the Western Conference regular season title. Injury caused him to miss the playoffs, and without him the side lost its edge and were knocked out in the West semi-finals.
2006: Traded to Chivas USA before the start of the 2006 season. Scored 14 goals and registered 8 assists for Bob Bradley’s side to lead the team in goals and help them make the playoffs for the first time.
2005: Traded to the Columbus Crew at season’s start in exchange for Tony Sanneh.  Played seven games for Columbus, scoring one goal and adding one assist.  Traded to NY for John Wolyniec on June 7.
2004: Saw a productive campaign cut short, when he had to undergo surgery on his right ankle in August to remove bone spurs and debris. Scored four goals and a pair of assists in 13 games.
2003: Led the Fire in scoring again with 14 goals and six assists.  Nominated for MLS Most Valuable Player and named MLS Player of the Month for June.
2002: Led the Fire in scoring with 14 goals and eight assists.
2000-01: Scored in his first start for Racing de Ferrol on December 25, 2000. Scored six goals in 19 games before opting to move back to Chicago during the summer break.
2000: The Fire’s top scorer for the third season, Razov was the offensive spark in the playoffs, scoring four goals and notching six assists in seven post-season games as Fire were runners-up to Kansas City in MLS Cup. Also scored 18 goals in regular season play and was part of the Fire team that won the US Open Cup. Earned a spot in the MLS All-Star game.
1999: Led Chicago in scoring with 16 goals overall, and was named MLS Player of the Month for March.
1998: Picked as a discovery player by Chicago on March 20 after spending two seasons with LA. Netted ten goals in 30 games during the Fire’s first season, helping them lift both the MLS Cup and the US Open Cup.
1996-97: Played a total of six games with the Galaxy over two seasons before moving to the Fire.

College: Played for UCLA and was their leading goalscorer in 1993 and 1994.