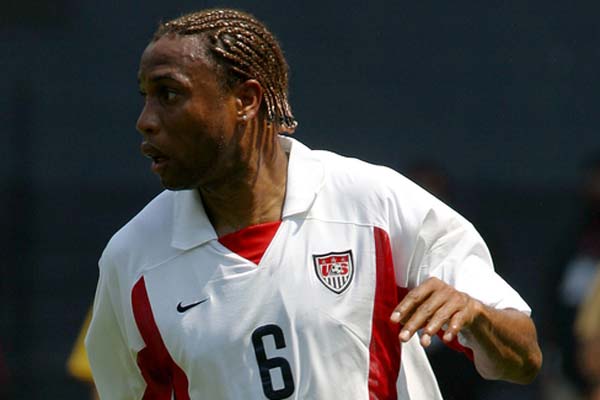 French-American David Regis earned a starter’s spot on the 1998 US World Cup squad, after being sworn in as a US citizen just weeks prior. This left-footed, speedy defender has played professionally in Europe since 1988.

Regis’ strength in the air, man-marking skills, and ability to get forward into the attack from his left-back position earned him a regular place in the National Team under coach Bruce Arena between 1998 and 2001. Regis retired in 2003.

2002: Named to 2002 World Cup roster but did not appear in a match
2002: Started at left back and played all 90 minutes against Italy (Feb. 13) and Germany (March 27)
2001: Appeared in eight CONCACAF World Cup qualifying matches, playing 707 minutes, mainly at left-back, and helping the US qualify for their fourth straight World Cup berth.
2000: Played the full 90 minutes in all eight caps during 2000 and  saw action in four of six World Cup qualifying matches.
1999: Played 90 minutes in two matches under new head coach Bruce Arena.
1998: Discovered by USMNT coach Steve Sampson in 1997 during a tour of Europe. Regis played in two matches following his swearing in as an American citizen in May before starting all three of the US National Team’s matches in the 1998 World Cup in France. Debuted for the full USMNT on May 23, 1998 against Kuwait.

2002-03: Retired from pro soccer after playing the 2002-03 season with Troyes of the French First Division.
2002: Given free transfer by Metz after they were relegated to the Second Division
2001:  Signed a new two-year contract with FC Metz of the French First  Division.
2000: Played 19 matches, starting 15, after a coaching change led to his re-introduction into the regular first-team line-up at Metz.
1999: Appeared in five matches for Metz.
1998-99: Signed with Metz and played in 21 league matches, and appeared in two Champions League matches and two UEFA Cup matches; helped Metz to the French League Cup final, where they were defeated by Lens.
1997-98: Signed with Karlsruher of the German Bundesliga on July 1, 1997, and scored five goals in league play and one in the UEFA Cup but left the team after they were relegated to the German Second Division.
1996-1997:  Played for RC Lens, scoring his first goal in November, 1996, against Nancy in  league play.
1995-1996: Played for Racing Club de Strasbourg.
1988:  Began professional career at Valenciennes at the age of 18.