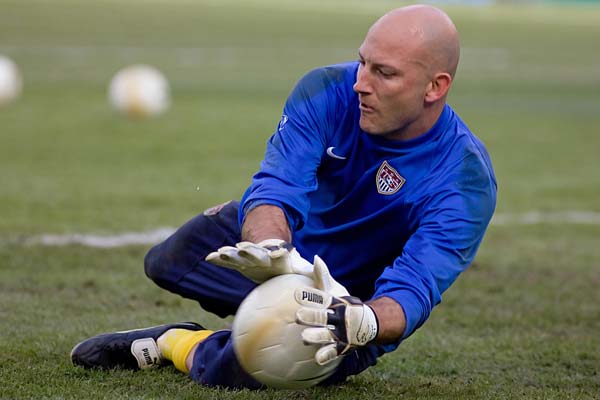 After serving as a backup to Kevin Hartman with the LA Galaxy for several years and then in New England, Matt Reis asserted himself once-and-for-all as a starting caliber MLS goalkeeper with his play in the 2004 season, keeping the job until announcing his retirement following the 2013 season. 2004 was also the year Reis broke into the USMNT picture, winning his first cap.

Over multiple seasons, Reis was a stalwart for the New England Revolution, considered one of the top goalkeepers in MLS and certainly among the toughest. He retired following the 2013 season after tearing his left quadriceps in the playoffs. Reis is now the goalkeeping coach with the LA Galaxy.

“I have been truly blessed for the past 16 years I’ve been able to do something that I love – play soccer for a living.” Matt Reis announces his retirement.

2007: Earned his second cap in a 3-2 victory over Denmark on January 20 at the Home Depot Center.
2004: Called into first camp near the end of the year. Trained with the squad, but was not named to the roster.

2013: Missed time with injuries, returning to retake the starting job and playing in 12 games. Injured in the playoffs and announced his retirement in December.
2012: Another season with 27 games played for the Revs.
2011: Played in 27 games and recorded five shutouts as the Revolution failed to make the playoffs.
2010: Part of a Revs club that failed to make the playoffs.
2009: Had a 0.96 goals against average in 24 games and led MLS with 114 saves.
2008: Played in 28 of 30 games for New England, appearing in 36 across all competitions. Won the SuperLiga title with the Revs.
2007: Played all 34 regular and post-season games, including 13 shutouts and a GAA of 1.43. Yet again on the losing side at MLS Cup, but helped team to its first ever trophy, the US Open Cup.
2006: Led MLS in shutouts (10) and saves (141) while playing in all 32 games for the Revolution. Was named as team MVP and was a finalist for MLS Goalkeeper of the Year.
2005:  Led MLS in saves with 115, and his 1.13 GAA was tied for second-best in MLS.  Set a club record with 16 wins.
2004: Posted a 7-10-7 record with a 1.36 GAA and 3 shutouts. His 24 appearance and 23 starts were both career highs. Stopped two PKs in Game Two of the Eastern Conference Semifinals at Columbus, and saved one shot and scored one in the penalty shootout at DC in the Eastern Conference Championship game, whoch the Revs lost. Revolution Defensive Player of the Year.
2003: Traded to the Revolution for Alex Pineda Chacon and a conditional draft pick. Started five games for the Revs.
2002: Started 10 out of 11 games played, with two shutouts for a 1.26 GAA. Was not a starter in LA’s MLS Cup win.
2001: Played 16 games( 15 starts).  Posted six shutouts and ended season with a 1.41 GAA.
2000: Played in six games, managing first pro shutout.
1999: Made one appearance, seeing just 10 minutes of action as backup to Kevin Hartman. Played in every US Open Cup match.
1998: Drafted by the LA Galaxy, played in five games (four starts).

College: Finished his college career at UCLA with an NCAA Championship (1997).