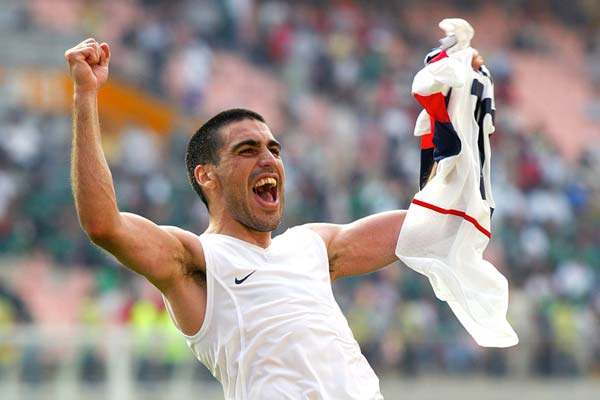 The most influential player of his generation and arguably one of the few US outfield players to merit the label ‘world class’, Claudio Reyna was the focal point of the US midfield for the best part of a decade up until his retirement from the international game after the 2006 World Cup.

There have been two sides to Reyna’s career, however. One has been the consistent on-field success of a player who moved across the top leagues of Europe, playing for storied sides such as Glasgow Rangers, Sunderland and Manchester City, while remaining a pivotal figure in the US team as its captain and midfield marshal. The other has been of a frustrating sense that, if it hadn’t been for a series of injuries, he could have achieved even more.

Reyna’s 31 World Cup qualifying games tie him for the most in team history.  Highlights of his National Team career include the brilliant assist on DaMarcus Beasley’s key goal in the World Cup clinching a 2-0 victory against Mexico in the fall of 2005.  And at the 2002 World Cup he demonstrated why he is often regarded as the best US field player ever, using his skill, vision and composure to lead the team to the quarter-finals, and being named to the competition’s Best XI.

After a career in the German Bundesliga, Reyna won a Scottish Premier League championship at Glasgow Rangers, and competed in the prestigious UEFA Champions League.  He was also highly regarded in the English Premier League at Manchester City, but suffered too many injuries to be consistently effective.

Reyna retired from international soccer at the end of the 2006 World Cup after playing in all three games for the US. He left the program with 112 caps, the fourth-highest total in history.  In 2007 he joined RB New York in Major League Soccer as one of the team’s two Designated Players.

In April of 2010, Reyna was named the US Soccer Federation’s technical director for youth soccer. In 2012, he was elected as a first ballot inductee to the National Soccer Hall of Fame. In May of 2013 Reyna took the job of Director of Football at New York City FC. He became sporting director of Austin FC in November, 2019 moving to an advisory role in January, 2023.

2006: Made four appearances for the U.S. national team, including starts in all three Group Play matches of the 2006 World Cup.  Came off injured in final game against Ghana after being dispossessed and giving up what turned out to  be the game-winning goal. Also delivered an inspired performance in the 1-1 tie with eventual champions Italy.
2005: Between club commitments, injury and needed rest, had a challenging year, appearing three times in qualifying for the US. Named Man of the Match against Trinidad & Tobago on August 17.
2004 – Started and played eight games, adding three assists on the season. Five starts in World Cup Qualifiers. Suffered an injury on September 18, which put him out of action through year’s end.
2003: Returned to the US line-up from knee surgery to play six games, including five at the CONCACAF Gold Cup.
2002: Named to the FIFA World Cup All-Star team. Missed the opening group game against Portugal due to injury, but then played every minute of the remaining four games in the US quarter-final run.
2001: Captained the US to their fourth consecutive World Cup finals berth.
2000: Named the Honda US Player of the Year.
1999 – Played in four matches for the National Team, wearing the captain’s armband twice and scoring one goal.
1998: Played every minute for the US in the 0-3 France World Cup campaign.
1997: Played in the FIFA All-Star game in Hong Kong and scored a goal.
1996: Part of Olympic team as one of the over-age players.
1995: Led US to semi-final of Copa America.
1995: Led US to US Cup title.
1994: Member of 1994 World Cup roster but did not play because of an injury. Scored his first international goal ,against Moldova on April 20.
1994: Made international debut against Norway on January 15.

2008: Announced his retirement on July 16 as a member of the New York Red Bulls.
2007: Had a mixed season at New York, managing 21 starts in regular season play, but registering just three assists.
2006-07: After spending the first half of the season with Manchester City, Reyna left the team at the end of 2006. On January 24 he joined the New York Red Bulls to play for former US coach Bruce Arena.
2005-06: Started well, playing in the first ten league matches, getting a goal and one assist. Suffered an injured MCL that kept him out for a month, then recovered to play four games in December before succumbing to a stress fracture in his right ankle just before the new year.
2004-05: Played first six games of the season for City, but then suffered a recurring groin injury that sidelined him for the remainder of the year.
2003-04: Moved to English Premier League side Manchester City
2002-03: Played 12 games before suffering season ending knee injury against Bolton in October.
2001-02: Scored six goals in 37 matches with Sunderland and Rangers.
2001: Transferred to Sunderland of English Premier League.
1999-2000: Helped Rangers to the Scottish Premiere League championship. Named Scotland’s Player of the Month in August and went on to score four goals in 11 league appearances with Rangers.
1998 – Transferred to Glasgow Rangers.
1998: Became first American player to captain a team in Europe after taking the Wolfsburg armband.
1997: Loaned to Bundesliga club VfL Wolfsburg.
1994: Made professional debut with Bayer Leverkusen of the German Bundesliga.