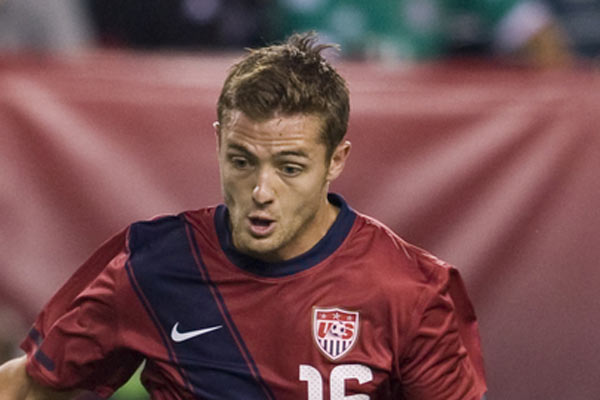 Robbie Rogers initially bypassed Major League Soccer to sign with Heerenveen in the Dutch League. He joined Columbus at the start of the 2007 season, and was part of the MLS Cup-winning squad in 2008. After 106 appearances with Columbus, he signed with Leeds United in January, 2012. He moved to the LA Galaxy in 2014. He has been a part of the USMNT setup since he was a youth player, with appearances for the Under-20 and Under-23 teams. At senior USMNT level, he played a key role in the 2009 Gold Cup.

In 2014, Rogers released his autobiography Coming Out to Play, telling his story of becoming the first openly gay athlete playing in a major team sport. His story is also set to become a network TV show. He announced his retirement from pro soccer on Nov 7, 2017.

2011: Second-half substitute against Mexico on Aug 10th and scored the equalizer.
2010: Played in the January friendly against Honduras and against El Salvador in February. Played in the Sendoff Series against the Czech Republic. Started against South Africa on Nov 17th.
2009: Won first cap with the National Team against Sweden on Jan 24th. Played in the Gold Cup, scoring against Grenada on July 4th. Had a dominant performance against Costa Rica in the final World Cup Qualifier at RFK Stadium, setting up both goals in the 2-2 draw.

2017: Missed the playoffs with the Galaxy, retiring at the end of the season.
2016: Made it to the Eastern Conference semifinals with the Galaxy.
2015: Advanced to the knockout round with LA.
2014: Returned to MLS with the LA Galaxy, winning the MLS Cup.
2012-13: Signed with Leeds United on Jan 12. Spent the first-half of the 2012-13 season on loan to Stevenage. Retired from professional soccer on Feb 13, 2013 but reconsidered and joined the Los Angeles Galaxy on May 25, 2013 in a move that required a trade for his rights with the Chicago Fire. Played in 11 games starting 7 for the Galaxy.
2011: 27 games played and two goals scored for Columbus.
2010: Played in 20 regular season games and two playoff games for the Supporters’ Shield winning Crew.
2009: Part of back-to-back Supporters’ Shield winners as the team with the best regular season record. Played in 22 games, starting 20 with one goal and five assists.
2008: Won the MLS Cup and was named to Major League Soccer’s Best XI.
2007: Moved to Major League Soccer, with Columbus winning his rights in an allocation lottery.  Started six games, playing in ten.
2006: Signed with Heerenveen, spending the season with the reserve team.

College:  Won the 2005 College Cup in his only season with the University of Maryland.  Honored on many all-Freshman teams.