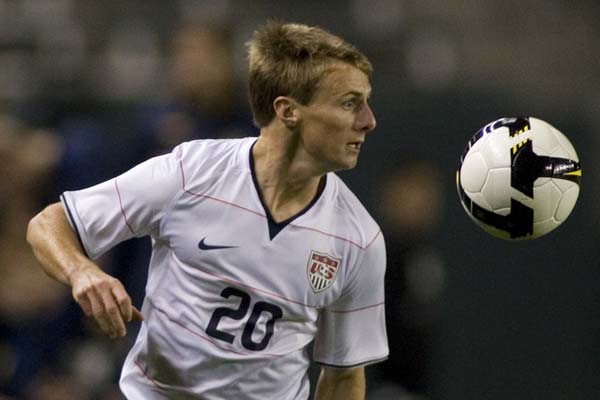 Chris Rolfe has proven at club level that he can make his strike partner better while raising his own game.  His club form led to opportunities with the USMNT.

An intelligent player with an eye for goal at all distances, Rolfe has a tremendously powerful shot, and can be equally dangerous as an out-and-out striker, or playing in a more withdrawn role.  During the 2007 season, he helped revive the Chicago Fire’s moribund year when he returned from injury for the latter part of the season.  Rolfe left for the Danish SuperLiga and AaB where he spent three seasons.  He returned to the Chicago Fire early in the 2012 season. In April 2014 Chicago traded Rolfe to DC United. Rolfe announced his retirement from pro soccer following the 2017 MLS season. He became the director of men’s soccer operations at Notre Dame in July, 2019.

2009: Played in the 3-2 win over Sweden on January 24th.
2008: Called into January training camp. Came on as sub for final 27 minutes in 2-0 win over Sweden.
2007: Injury restricted him to just two appearances, one as a sub in January exhibition win over Denmark, the second as starter in 2-0 win over Mexico the following month.
2006: Played three times, including first start in a 4-0 win over Guatemala.
2005: Made his debut with the US National Team on November 12 in a friendly against Scotland.

2017: Did not play due to concussions.
2016: Suffered a concussion in late April and missed the rest of DC United’s season.
2015: Made 31 starts and scored ten goals for United. Made the Eastern Conference semifinals
2014: Played in 2 games with Chicago. Traded to DC on April 2 playing in 21 games and scoring six goals.
2013: Played in 31 games for Chicago.
2012: After starting the Danish season with Aalborg, Rolfe signed with MLS and returned to Chicago playing in 22 games.
2010-11: Injuries cost Rolfe the start of the season with Aalborg.
2009-10: Moved to Aalborg where he played in seven games scoring once.
2008: A regular in the Chicago Fire attack.
2007: Started well for Chicago but then was out of action for three months injured. His return to the starting lineup coincided with the arrival of Cuauhtemoc Blanco and new coach Juan Carlos Osorio, leading to late playoff drive before Eastern Conference final loss to Revs. Eight goals and three assists in 22 games (21 starts) overall.
2006: Seven goals and one assist in 23 starts overall as the Fire faltered in the first round of the playoffs.
2005: Played in 32 games and started 24 games in the regular and post-season, scoring eight goals and adding six assists.  Finished second in the MLS Rookie of the Year award to Revs’ Michael Parkhurst.

College and High School:  Missed a lot of time due to injury but posted good stats throughout. Concluded his career sixth all-time at UD in goals with 31, third in total points with 87, and as the Flyers’ career leader in assists with 25. Played at Fairmont High School in Kettering, OH. Tallied a school record 30 goals and 72 points as a junior, leading his team to a District Championship. In his senior season, named Player of the Year and First Team in the League, Area, and District. Played two seasons with the Chicago Fire Premier (formerly Fire Reserves) of the Premier Development League Finished fifth on the Fire Premier in scoring in 2004 with 17 points on six goals and five assists in only 11 games for a squad that saw eight players taken in the 2005 MLS SuperDraft.