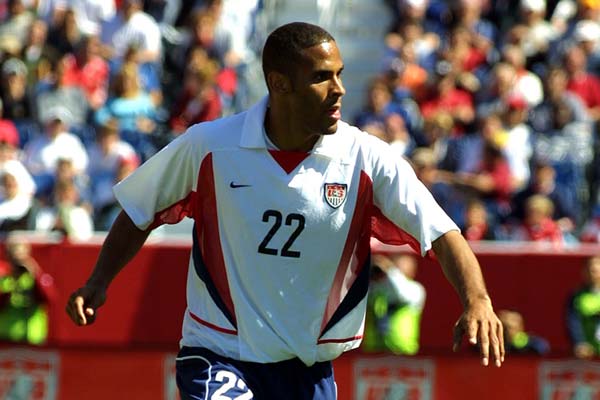 A strong flank player who rose from the A-League to Major League Soccer to the German Bundesliga, Tony Sanneh was an established member of the USMNT player pool at the end of the 1990s and the start of the new century.

He made his first appearance with the USA in 1997 and has played 43 more times in total for the USMNT. In 2004 he returned to Major League Soccer to play for the Columbus Crew (followed by Chicago and the Rapids) after several years in the German Bundesliga with FC Nurnberg and Hertha Berlin.

Sanneh displayed one of the most impressive performances at the 2002 World Cup for the USMNT in leading the defense from his position at right back.

Tony is active with charitable causes through The Sanneh Foundation.

2005: Made two starts, against Cuba and Costa Rica in the Gold Cup.
2004: Played four games, starting three  and scoring one goal. Battled injury off and on throughout the year.
2002: One of three players to play every minute of all five games at the 2002 World Cup. Led numerous attacks in the quarterfinal against Germany, almost scoring the tying goal twice in the second half. Assisted on Brian McBride’s brilliant goal against Portugal with a artful cross from the right side of the field. Scored his second career goal for the US in 2-1 win against Uruguay on May 12.
2001: Earned starts in 10 of his 11  appearances with the National Team. Contributed one assist.
2000: Played all  three of the USA’s Nike US Cup matches, and started four of six World Cup  qualifying matches.
1999: Scored his first international goal on February 6, 1999 in a 3-0 win over Germany.  Also started and played 90 minutes in a stunning 1-0 win over Argentina.
1997: Had two assists in three appearances after making his first appearance with the National Team in January 9 against China, coming on as a sub in a 2-1 loss in Kunming.

2009: Signed with the LA Galaxy where he played in 13 games, starting five. Retired at the end of the season.
2008: Did not play.
2007: Played nine games (five starts) for the Colorado Rapids after a short spell with the USL’s Minnesota Thunder.
2006: Played 21 games (17 starts) for the Fire.
2005: Played 13 games (12 starts) for the Fire after moving to Chicago from Columbus.
2004: Returned to MLS in the summer and joined the Columbus Crew. Played six regular season and two play-off games, scoring two goals and adding one assist.
2003-04: After missing almost 15 months due to a back injury, Sanneh finally returned to the field for Nurnberg’s final seven regular season games.
2001-02: Scored two goals and two assists  in 29 games for Nurnberg – played throughout 26 of those   games.
2001: Transferred to Bundesliga side FC Nurnberg from Hertha  Berlin.
2000: Scored first Bundesliga goal in a 1-1 draw with Schalke 04 on October 30, and made four appearances for Hertha in the Champions League.
1999: Signed with Hertha Berlin of the German Bundesliga  in February. Played in five of Hertha’ss last six games.
1998: 21 games (19 starts) overall for DC United included seven goals and six assists as DC lost MLS Cup.
1997: Headed in the game-winning goal in D.C. United’s MLS Cup victory over the Colorado Rapids. Totaled eight goals and 14 assists in 34 games (33 starts) in his first full season in MLS.
1996: His header in the 73rd minute of the first-ever MLS Cup set up DC United’s 3-2 overtime win over the LA Galaxy.  Finished fourth on United in scoring with four regular season goals and eight assists after beginning the season with the A-League’s Minnesota Thunder.
1995: Finished second in the USL D3 Pro League in scoring with 18 goals and 22 assists for the Minnesota Thunder. Also played for the Chicago Power of the NPSL (indoor) and finished as runner up in the rookie of the year voting.
1994: Had 14 goals and 14 assists for the Milwaukee Rampage of the  USL.

Youth and college: Sanneh was a two-time All-State high school player and a collegiate All-American at the University of Wisconsin-Milwaukee, where he is the school’s all-time leading scorer (53 goals, 32 assists). He won a US Youth Soccer U-19 national championship as a member of the St. Paul (Minn.) Blackhawks in 1990.