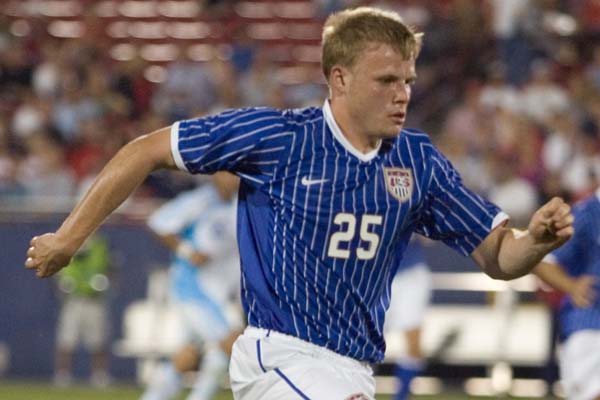 Born in St. Louis, Frank Simek moved to London as a teenager and took up the game the other kids were playing. Within a short time, he was part of the Arsenal academy system and eventually their youth and full team.

2007: Made his debut against Guatemala on March 28th.  Also played three games at the Gold Cup, including a substitute’s appearance in the final win over Mexico.

2012-13: Left Carlisle at the end of the season with 109 appearances. Carlisle finished 17th.
2011-12: Missed part of the season due to injury. Carlisle finished 8th.
2010-11: Regular in Carlisle’s squad, winning the Football League Trophy and finishing 12th in League One.
2009-10: Not a regular in a Sheffield Wednesday side that struggled and were eventually relegated.  Simek’s contract ended at the end of the season. Signed with Carlisle United for two years.
2008-09: Limited appearances due to injury.
2007-08: Kept starting right back position, making 20 appearances in all competitions until suffering an ankle injury in December 2007 that looked like keeping him out the team for two months.
2006-07: A regular at right back with Sheffield Wednesday in England’s Championship (second tier), again making 45 appearances in all competitions. In summer of 2007, signs new three-year contract.
2005-06: Joins Sheffield Wednesday from Arsenal on a three-year contract, becoming a regular in the squad, making 45 appearances in all competitions.
2004-05: Loaned to Bournemouth where he made eight appearances.
2003-04: Loaned to QPR where he made five appearances.
2002-03: Makes his Arsenal debut against Wolverhampton Wanderers on December 2 in the League Cup.  The only first team appearance he would make for Arsenal.

High School: After signing a developmental contract with Arsenal, Simek returned to play at Saint Louis University High School but Arsenal called him back to play on their youth team.