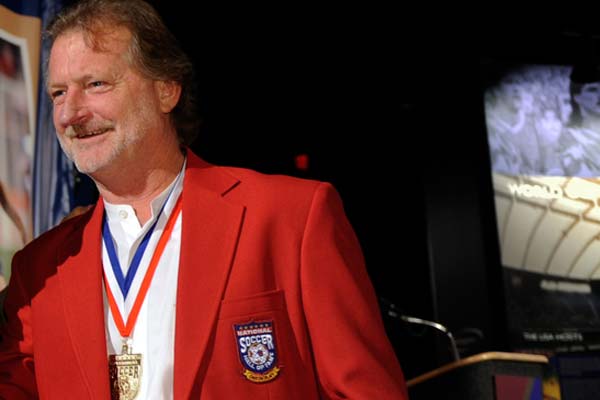 Bobby Smith was a mainstay in the United States defense in the mid 1970’s, a time when the US focused mainly on qualifying for the World Cup.  Smith was part of the ’78 campaign and earned his last cap in the warm-up before the qualifying run in 1980.  For his clubs,Smith was an elite player and a rarity for US soccer during that period, getting European experience with Dundalk in 1974-75.

A three-time North American Soccer League champion, Smith was part of the remarkable Philadelphia Atoms, champions in their expansion year, and the Pele-fueled Cosmos.  He also spent time in the Major Indoor Soccer League with the Philadelphia Fever.  He retired as a member of the NASL’s Montreal Manic in 1981.

Smith was inducted as a member of the National Soccer Hall of Fame class of 2007.

1980: Part of the World Cup qualifying campaign.  Played his last game for the US against Portugal in Lisbon on Oct. 7th.
1976: Appeared in the World Cup Qualifiers for ’78.  Played in the Bicentenntial Cup against Brazil, England, and Italy on a Team America squad that included foreign NASL stars like Pele, Bobby Moore, and Giorgio Chinaglia.
1975: Part of the US squad in another transitional year with multiple coaches.
1974: Played in both games on the US schedule as part of new head coach Detmar Cramer’s squad, both losses to Mexico in a September home and home series.
1973: Earned his first cap against Poland on Aug. 12th in a transitional year for the National Team program.

College and High School: Four-year letterman at Rider University where he was an offensive player and a two-time All-Middle Atlantic Conference West Division Most Valuable Player.  Product of Steinert High School.